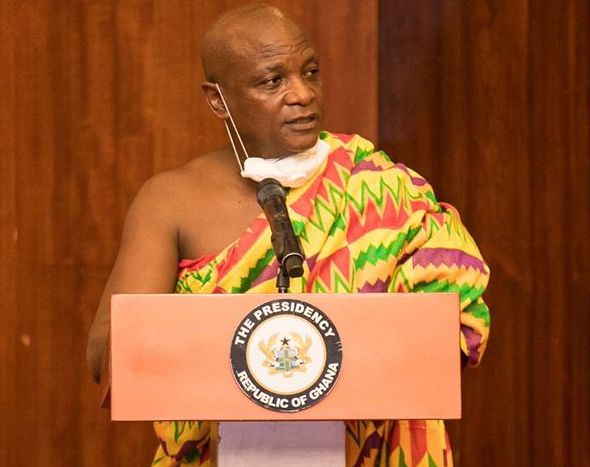 The National House of Chiefs and some paramount chiefs from the Volta Region have condemned the action of a secessionist group in the region, calling for a concerted effort to swiftly deal with the issue before it becomes a threat to national peace.

According to the traditional authorities, the action of the group was a threat to national peace, as they believed “there could not be a country within a country.”

Last Friday morning, some people alleging to be members of the group, blocked major roads at entry points into the Volta Region.

The group, yet to be properly identified, also abducted three police officers.

The situation led to the death of one person, while 31 members of the group were arrested following the melee which held up travellers entering and exiting the region for several hours.

Currently, there is still a heavy security presence at Battor, Mepe, Aveyime, Juapong areas where the disturbances occurred, with some officials conducting snap checks on the major roads (Accra- Aflao and Accra-Ho).

Before he led a team to meet the Minister of National Security to be briefed on the issue, the President of the National House of Chiefs (NHC), Togbe Afede XIV, said the actions of the group were very worrying and had to be condemned in no uncertain terms.

“This is not something anyone must condone. This is something everyone must support the government to ensure that it is nipped in the bud, so we continue to live in peace as a nation of one people with a common destiny,”

“These are the kind of things I don’t recollect ever happening in our country; the Minister has already briefed members of the Standing Committee on these happenings and it is alarming.”

Togbe Afede XIV thus called on chiefs, particularly those from the Volta Region, to support the government to ensure that the situation did not escalate any further.

Addressing the media at Hohoe yesterday, the chiefs of Gbi Traditional Area condemned the conduct of the members of separatists Homeland Study Group Foundation, warning them to stay away from the area.

"We do not condone this act of illegality and vandalism being perpetuated by this group. "We want to advise the group to stay off Gbi-Hohoe because we do not belong to their movement and for that matter would resist fearlessly any attempt to invade our traditional area as custodians of the land."

Togbe Adzimah said the chiefs and people of Hohoe, including settler communities in the area were in no position to alter Ghana's history which Gbi Hohoe had been a part of since independence.

The chiefs called on the government and security agencies to "tighten their security networks", and pledged their support to the security in thwarting the activities of the group.

Togbe Adzimah also cautioned the youth and other settlers in the traditional area not to allow themselves to be lured by such groups for their selfish interest.

"We advise our citizenry to say no to the activities of this group and report any strange personality found within the area in these days to the law enforcement agencies."

Similarly, the Awoamefia of the Anlo State, Togbi Sri III, has also called on authorities to deal with persons involved in last Friday’s disturbances according to law without fear or favour.

In a statement, Togbi Sri condemned the separatists for the disturbances on the Accra-Aflao and Accra-Ho roads.

"I wish to state categorically that the Anlo State, its chiefs and people do not associate nor approve of the actions of such people and firmly disassociate themselves from their subversive actions".

He reaffirmed the Anlo State for the unity and sanctity of the sovereign state of Ghana.

Additionally, the chiefs and people of the Alavanyo Traditional Area have also condemned the action.

The Overload of the traditional council, Togbega Tsedze Atakora VII, speaking on behalf of the divisional chiefs, queens, sub-chiefs and the entire citizenry of Alavanyo Traditional Area, both home and abroad, dissociated themselves from the action of the separatist group.

“I wish to state without any equivocation that so far as we are concerned, Alavanyo is part of the sovereign state of the Republic of Ghana and that Alavanyo owes allegiance to the State and Government of Ghana,” Togbega Atakora VII emphasised.

The Homeland Study Group Foundation, led by 83-year-old Charles Kormi Kudzordzi, has been championing an agenda to declare parts of the Volta and Oti regions a sovereign state, with the name ‘Western Togoland’.

On November 16, 2019, the leader, with about 100 people in attendance at Moleme in Ho, unlawfully declared the Volta Region a sovereign state of Western Togoland.