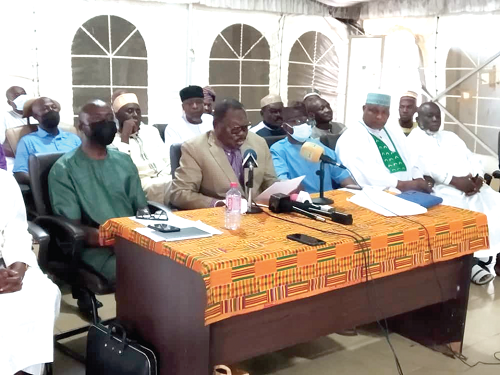 This year’s Hajj for Muslims in the country has been cancelled for the second year in a row.

This follows a decision by the government of Saudi Arabia to restrict the annual pilgrimage this year to its citizens, residents and a maximum of 60,000 pilgrims as a result of the COVID-19 pandemic.

The two bodies gave an assurance that money paid towards the abortive hajj would be refunded expeditiously to those who paid, after applications had been sent to the board.

"Pilgrims who paid directly to the Hajj Board and wish to receive a refund of their fees for 2020 payments must apply to the board for the refund to be paid expeditiously," Sheikh Quaye said.

He added that pilgrims who paid their fares to the Hajj Board via agents were to apply for their refund through their agents.

Sheikh Quaye further said pilgrims who wished to retain their deposit with the board through their agents would be exempted from paying for any increment in the hajj fare for 2022.

According to him, if there was an increment in the fare in 2022, the board would pay the difference for such pilgrims on compassionate grounds.

For his part, Alhaji Suleiman said the refund would be made as soon as the verification process was completed.

According to him, the decision by the Ministry of Hajj and Umrah Affairs of Saudi Arabia to cancel the hajj was because it would be difficult to control the pilgrims and also ensure social distancing as part of the COVID-19 protocols.

Last year, only 10,000 residents of Saudi Arabia were allowed to take part in the hajj. The figure was a far cry from the 2.5 million Muslims all over the world who participated in the hajj in 2019.

The restriction, which was as a result of the COVID-19, affected about 2,500 prospective Ghanaian pilgrims who had paid about GH¢50 million to the Hajj Board as fare.

Six thousand Ghanaian pilgrims participated in the hajj in 2019, an increase over the 5,536 pilgrims who took part in the religious exercise in 2018.