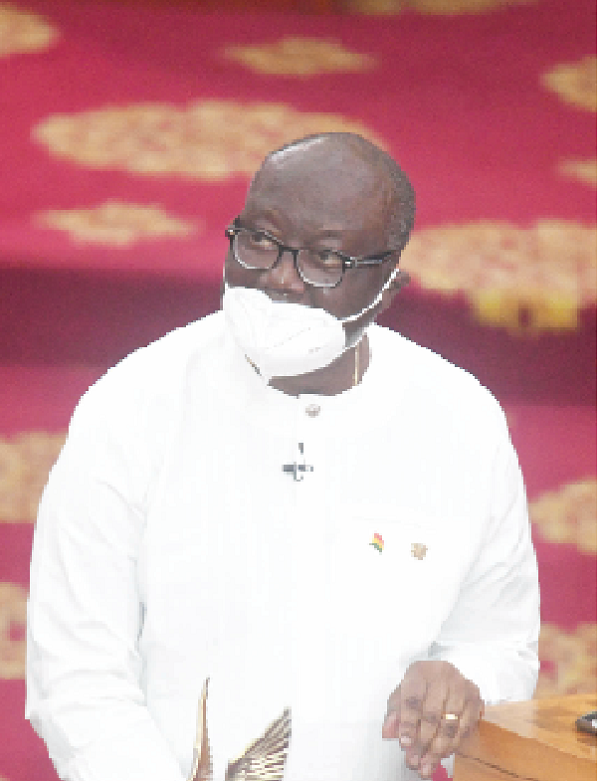 The government is seeking approval from Parliament to spend GH¢137.5 billion for the 2022 fiscal year.

This was disclosed by the Minister of Finance, Mr Ken Ofori-Atta, when he presented the 2022 Budget and Economic Statement to Parliament yesterday.

Out of that amount, domestic revenue is estimated at GH¢99.54 billion, representing an annual growth of 44 per cent over the projected outturn for 2021.

Mr Ofori-Atta said the resource mobilisation for 2022 would be underpinned by the legislation of some new tax policy initiatives to support revenue mobilisation.

He said the increase in domestic revenue by 44 per cent would be as a result of the impact of expected improvement in tax compliance, reforms in revenue administration, as well as a rack of tax policy initiatives.

Of that amount, the minister said, GH¢8.31 billion would be retained for use by ministries, departments and agencies (MDAs), while GH¢1.93 billion would be lodged, with a potential yield of GH¢152 million from the Internally Generated Fund (IGF) Capping Policy.

“Mr Speaker, receipts from upstream petroleum activities are projected at GH¢6.62 billion, representing a 23.6 per cent growth over the projected outturn for 2021, mainly on the back of an expected increase in both benchmark production and the price of crude oil,” he said.

The estimates for total revenue and grants and total expenditure (including arrears clearance) are expected to result in an overall fiscal deficit (including financial costs and IPPs payments) of GH¢37.01 billion, equivalent to 7.4 per cent of GDP.

A corresponding primary surplus of GH¢435 million, equivalent to 0.1 per cent of GDP, is also projected for the year.

Mr Ofori-Atta said the total foreign financing and exceptional financing, which is the use of International Monetary Fund (IMF) Special Drawing Rights (SDRs) allocation, would amount to GH¢9.09 billion, representing 1.8 per cent of GDP.

He said the foreign financing would include a planned international financing programme to raise at least $750 million, with an option to increase it by a further $750 million for budget support and liability management.

“On the other hand, financing of the deficit from domestic sources, including net issuances from debt, will amount to GH¢27.92 billion.

“The exceptional financing from the use of the newly allocated SDRs by the IMF will augment and reduce domestic borrowing needs,” he said.

End-of-year 2022 inflation rate was projected at eight per cent, with a primary surplus of 0.1 per cent of GDP, he said.

Gross International Reserves were also expected to cover not less than four months of imports, he added.

Mr Ofori-Atta outlined some broad macroeconomic goals to support the medium-term objectives, including the restoration of macroeconomic stability, with a focus on fiscal consolidation and debt sustainability.

He said the government would also seek to maintain a healthy balance between the implementation of the revitalisation and transformation programme and fiscal consolidation to promote growth within a stable macroeconomic environment.

The minister said the government would provide an environment that was supportive of the private sector and also build a robust financial sector to support growth and development.

“We will also deepen structural reforms to make the machinery of government work more efficiently and effectively to support socio-economic transformation and implement reforms to increase revenue mobilisation and the efficiency of public expenditures,” he said.