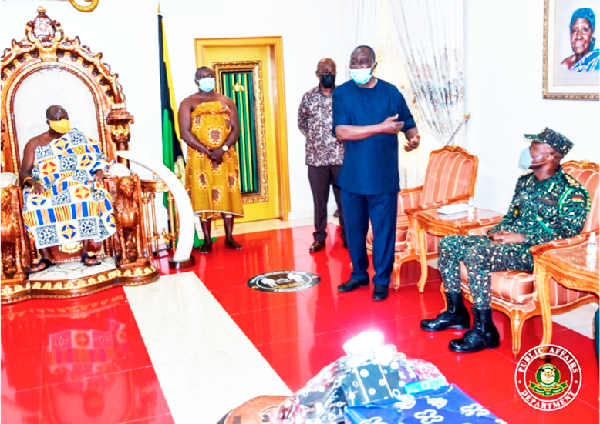 Dr Edward Prempeh (second right), Chairman of the Governing Council of the Immigration Service, introducing the GIS delegation to the Asantehene

The Asantehene, Otumfuo Osei Tutu II, has urged the Ghana Immigration Service to tighten security at the borders to prevent extremists from entering into the country.

Otumfuo Osei Tutu made the call when the Controller-General of Immigration (CGI), Mr Kwame Asuah Takyi and the GIS management committee paid a courtesy call on him at the Manhyia Palace last Saturday.

“Your presence at the borders is very critical to the security of the nation and I urge you to ensure that your men deployed at our borders are diligent in their duty,” the Asantehene stressed.

The visit to Manhyia also afforded the Asantehene and the GIS management committee the opportunity to discuss issues of mutual interest.

The Asantehene said efforts by the government to retool the service had made the GIS a formidable force at the borders and deepened its critical role in supporting internal security.

Otumfuo Osei Tutu commended the CGI for his leadership style characterised by his travel around the country to engage with various stakeholders.

“I have been observing your trips round the country and how you engage with stakeholders to deepen the collaboration between you and the stakeholders,” the Asantehene said, adding that “it is for this reason, among others, that you were awarded with the Millennium Excellence Award for National Cohesion and Security.”

He expressed appreciation to the Asantehene for the Millennium Excellence Award, describing it as “a great honour and privilege”.

The CGI said he would continue to motivate officers of the GIS to enhance security at the borders and ensure Ghana remains an oasis of peace in the sub region.