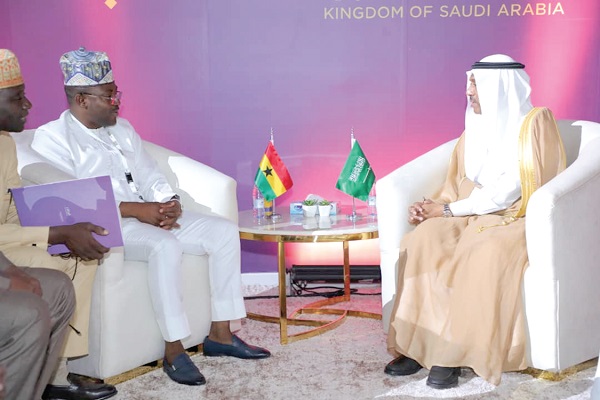 THE Kingdom of Saudi Arabia has signed an agreement with Ghana and other countries to ensure a successful Hajj this year.

The Deputy Minister of Hajj and Umrah Services of the Kingdom, Dr Abdulfattah Suleiman Mashat, signed for his country, while the Leader of the Ghanaian delegation, Hajj Farouk Hamza, appended his signature at a ceremony in Jeddah, Saudi Arabia.

The agreement covers the allocation of quota, ports and means of arrival and departure, as well as organisational instructions to enhance safety and comfort of pilgrims from the entire processes and period of the pilgrimage in the Kingdom.

The agreements were signed on the sidelines of Hajj Expo 2023, the largest gathering and event related to Hajj and Umrah services in the Kingdom.

It was attended by more than 57 countries, with over 70 speakers and experts.

Also present were representatives of some 200 companies specialised in Hajj and Umrah services.

The ceremony attracted more than 60,000 visitors who exchanged ideas and visions, innovations and experiences.

“It is worth noting that the conference, during four days in 40 workshops, in addition to nine main sessions, discussed several topics that would contribute to the experience of pilgrims.

“It employed digital solutions to build an integrated and sustainable system to enhance services and achieve the goals of the Kingdom's Vision 2030,” a statement issued by the Saudi Arabia Embassy in Accra said.

According to the statement, it was important that representatives of participating countries attended the event to sign the agreement to enable them to organise the affairs of their citizens in advance of the Hajj and Umrah season to, among other objectives, ensure the comfort of their pilgrims.

“All these efforts come within the framework of the Kingdom of Saudi Arabia’s endeavour to provide distinguished services to pilgrims, and work to enrich their experience at all levels of logistics, security, technology, as well as culture and knowledge”.

“These can be achieved through the concerted effort of all governments, the private sector, entrepreneurs and partners from around the world,” it added.