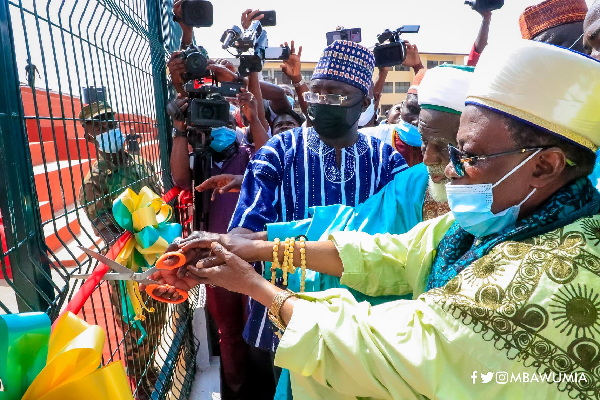 The new turf has stands for spectators, changing rooms and an inner perimeter, among other facilities.

It was undertaken in fulfilment of a promise President Nana Addo Dankwa Akufo-Addo made to the National Chief Imam in April 2018 when the Islamic cleric turned 99 years and was constructed by the Ministry of Inner Cities and Zongo Development and sponsored by the Zongo Development Fund.

The inaugural ceremony was part of activities marking the second Zongo for Peace and Development Conference organised with the help and support of the Ministry of Inner Cities and Zongo Development.

Vice-President Bawumia said it was appropriate to have an ultra-modern park for the youth of New Fadama and its environs who had enormous enthusiasm for football, while it was also fitting to name the facility after the most iconic member of the community and who was also a great statesman.

He said the turf was constructed in similar fashion to the ones in Kyebi, Walewale, Tafo and Madina zongos and was part of President Akufo-Addo’s vision to provide the zongos and inner cities with meaningful development.

Dr Bawumia said before the NPP came into office in 2017, there were only two astro turfs in the whole of Ghana, but :“Today we have constructed close to 29 astro turf and about 10 out of the 29 are in zongo communities.”
He said the government’s investments in astro turfs in zongos were intended to unearth more football talents in those areas.

A special talent hunt project, he added, would also be launched to unearth, nurture and promote more football talents in zongo communities.

Vice-President Bawumia said it was the government’s vision and focus to make education a catalyst for developing zongo communities holistically.

He said the Ministry of Zongo and Inner Cities Development had, through the Zongo Development Fund, built classrooms, many of which were at various stages of completion in many zongo communities across the country.

Additionally, he said, the government, through the fund, had launched a special programme to train brilliant needy students selected from the zongos as medical doctors of which 40 were already in Cuba studying medicine on full government scholarships.

According to Dr Bawumia, another set would be selected next year and expressed the hope that all of them would return as qualified doctors to serve their nation.

“In the area of education, also, grants are being provided to brilliant needy students from zongo communities to pursue various education programmes in tertiary institutions. So far, about 460 applications have been approved and the Fund had paid for 160 of them and was working to pay for the remaining 300. This is to help our students in the zongos gain access to tertiary education,” he said.

He pointed out that being among the disadvantaged communities in the country, the zongos were among the biggest beneficiaries of the free SHS programme.

The Minister of Zongo and Inner Cities Development, Dr Mustapha Abdul Hamid, said Ghanaians were now very much aware of who they wanted to lead the country.

That, he explained, was as a result of the changes and transformation that the government, led by President Akufo-Addo, had spearheaded across zongos and the country.

In his message of peace, the Chief Imam of the Ghana Police Service, Superintendent Hussein Abdul Rahim , urged Muslims to ensure that there was goodwill and harmony in all that they did.

A representative of the National Peace Council and Spokesperson for the National Chief Imam, Sheikh Aremeyaw Shaibu, urged Muslims to be agents of peace in the run up to the December 7 elections.

In another development, the Vice-President has inaugurated a Community Health Nursing College at Nkanchina and a police station in the Kpandai District.

The newly established nurses training institution is the first tertiary institution to be established in the Kpandai District. The police station is to help beef up security in the district.

Inaugurating the projects, the Vice-President said as part of the government's commitment to reduce unemployment in the country, a total of 92,000 graduates from nursing training institutions across the country had over the last four years been recruited into the health sector.

He said Parliament had approved a budget for the construction of a district hospital in the Kpandai District, adding that work was going to commence soon.

"I am happy to announce that the preliminary approval for the Kpandai District hospital has been completed and very soon, the contractor will commence work," he added.

Dr Bawumia said 33 communities in the Kpandai constituency including Nkanchina had also been connected to the national electricity grid.

He also cut sod for the construction of a library which, he said, would contribute significantly to improving education in the Kpandai community.

In a joint address to express their gratitude to the government, the chiefs of Nawuri and Nchumuru traditional areas, Nana Abugaba II and Nana Binyunji I, commended the government for the many developmental projects established in their areas.

They appealed to the government, nonetheless, to complete an E-Block school structure that was being built by the previous government at Jamboi.