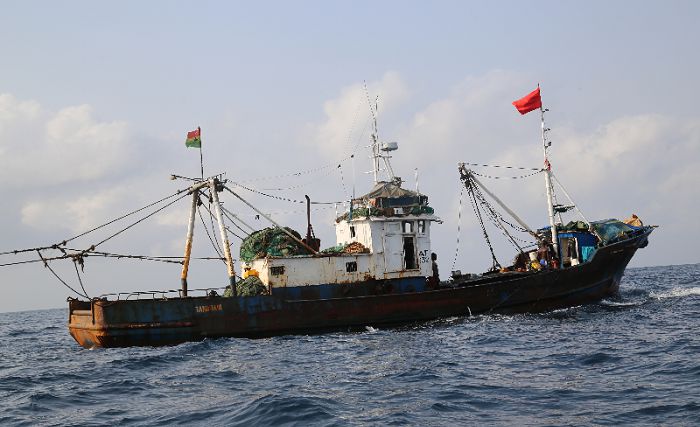 The incident, which occurred about 7:35 a.m. on August 28, 2020, saw the pirates abandoning the vessel and its remaining crew of Ghanaians in Togolese waters and left with their captives, made up of the captain of the vessel and the chief engineer.

A source told the Daily Graphic that the pirates, numbering about eight, accosted the vessel using a speed boat, hijacked and took control of it.

They then moved the vessel about 106 nautical miles across the border into the EEZ of Togo, where they took away the two Koreans, leaving the remaining crew of Ghanaians.

It said the Ghanaian crew retreated into Ghanaian waters, where officers of the Ghana Navy took over the vessel and sent it to the Tema Fishing Harbour.

The incident is the second in three months after a similar one saw five Koreans and some Ghanaian crew members kidnapped aboard a Panofi Frontier vessel in Beninois waters on Wednesday, June 24, 2020, with the victims being released nearly three weeks ago.

According to the source, the pirates were believed to have taken the two hostages to the Niger Delta in southern Nigeria.

The Daily Graphic was told that there had been deployments within Beninois and Nigerian sea borders to facilitate the rescue of the victims.

“The Navy has tasked all Forward Operations Bases to conduct coastal patrol to locate the pirates and the kidnapped crew, while another vessel has been dispatched to conduct a search with the Benin Navy ship along the Nigeria-Benin border,” a wireless security message sighted by the Daily Graphic read.

The Crime Officer of the Marine Police Unit at the Tema Port, Superintendent Mr. Felix Asare, confirmed the incident and said the unit was working with other agencies and the Korean Embassy towards the safe release of the victims.

The Executive Director of the Fisheries Commission, Mr. Michael Arthur Dadzie, described the incident as one of national security that ought to be taken seriously and addressed.

He told the Daily Graphic that the tuna sector produced some 70,000 tonnes per annum, generating in excess of $350,000 million for the economy annually.

“However, uncertainties over the security issues are causing the Koreans, who are major players in the sector, to withdraw from investing further, and the implications could be dire if these security challenges are not addressed,” he said.

He was also worried that while the COVID-19 pandemic had affected the sector significantly, the present situation could cause a further decline should the foreign partners withdraw their expertise and investments.

A maritime security expert, Dr. Ali Kamal-Deen, sharing his opinion on the latest development, said while the incident might not be an isolated case, judging from similar attacks from 2018 to June 2020, there was the need for Ghana to have a high level of maritime domain awareness by way of monitoring, receiving reports from vessels and other crafts at sea and, more importantly, a legal system which could deal adequately with pirates when they were arrested.

“There are open sources of tracking vessels, just like aircraft, but the question is: are these gangs just using open source information or they are using higher intelligence that is available to them?” he queried.

Dr. Kamal-Deen also said in most of the attacks, the pirates often struck based on the availability of foreign crew in vessels.

“The more foreign crew are available on the vessel, the more susceptible it is to attack, since those are the dynamics for the demand of ransom,” he said.

He lamented Ghana’s legal regime when it came to handling cases of piracy each time they occurred.

“The type of piracy that the world is dealing with today is very sophisticated and there are no provisions for them in our laws,” he said.

“The law is a major deterrent for crime, and when criminals know that they can be promptly prosecuted, they are unlikely to perpetrate their activities, or even if they do, they will know the law will deal with them,” he explained.

Meanwhile, the Ghana Tuna Association, in a petition to the President and some relevant bodies, has expressed concerns over the incident.

The petition, signed by the Secretary of the association, Mr. Richster Amarh Amarfio, said the practice, if not addressed, could go to incentivise particularly unemployed youth to do same, especially as the country’s oil exploration and production activities continued to rise.