PAC decries loss of state funds due to poor accounting 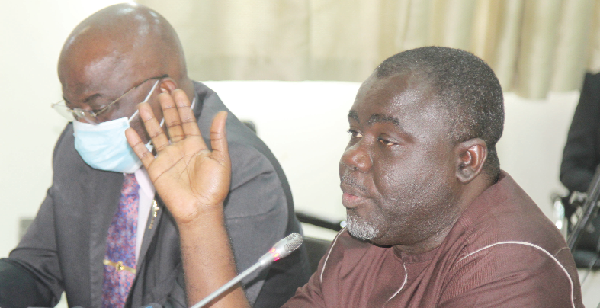 Proceedings at the Public Accounts Committee (PAC) sitting in Parliament have exposed poor accounting and weak control systems in some state institutions, leading to loss of state funds.

When some institutions under the ministries of Transport and Aviation appeared before PAC yesterday to respond to queries in the Auditor-General’s report of 2017, it was established that poor financial management and improper record-keeping remained a hurdle to be cleared to ensure the judicious use of public resources.

The institutions that appeared before the PAC were the Ghana Ports and Harbours Authority (GPHA), the Government Technical Training Centre (GTTC), the Ghana Maritime Authority (GMA), the Ghana Civil Aviation Authority (GCAA), and the Ghana Airport Company Limited (GACL).

While some of the institutions failed to ensure best corporate practices to prevent waste, weak accounting systems in others paved the way for some officials to misappropriate funds.

For instance, when the GTTC took its turn in the hot seat, it came to light that two of its officials had misappropriated GH¢65,368 between 2011 and 2016.

Although the Auditor-General's report asked the GTTC to recover the misappropriated amount with interest, it had been able to retrieve only GH¢30,100, leaving a balance of GH¢35,268.

The Principal of GTTC, Mr. Emmanuel Kwafo Offei, explained to the committee that further probe into the issue had revealed that the two officials, identified as Messrs Yorke and Anim, were responsible for misappropriating GH¢30,100 and it had been retrieved from them.

He added that other officials before them had contributed to the mystery behind the remaining GH¢35,268.

The principal, however, said after those other officials had been contacted after the query by the Auditor-General, some receipts covering the remaining GH¢35,268 had been found.

After a period of back and forth between GTTC officials and PAC members, the Chairman of the committee, Mr. James Klutse Avedzi, directed that the Ghana Audit Service should vet the receipts to ascertain their veracity and report to the committee.

The GTTC was also cited for printing receipt books without authorisation and using them to transact business.

Additionally, the centre was cited for not recording receipt books in the stock register.

Moreover, it was found to have charged unapproved fees.

Mr. Offei admitted those lapses and said the centre had taken steps to address the weaknesses, as recommended by the Auditor-General.

For its part, the GPHA was found to have used over GH¢1.3 million to purchase clothes for its staff without a proper report on the transaction.
The authority was also queried for receiving inventory items for more than six months without accounting for them.

The GPHA officials, led by its Director-General, Mr. Michael Luguje, explained that there was an arrangement between the management of the authority and the staff to pre-fund the cost of the fabrics.

He said there was a delay in accounting for the transaction before the audit exercise was conducted, noting that the amount had subsequently been retrieved from the staff in full.

The Minister of Transport, Mr. Kwaku Ofori Asiamah, who was at the PAC to support the transport sector agencies, gave an assurance that the government was on course to seeing to the construction of the Keta Port.

He said a consortium of consultants, led by a German firm, was currently carrying out feasibility studies on the project.

"Per the discussions we had with them, they are supposed to present the report to us from the last quarter of this year to the first quarter of 2021 and we hope that by December this year we will get the final feasibility study which will determine the infrastructure needs of the place and go to the market for them," he said.

Mr. Asiamah made this known when the Member of Parliament (MP) for Keta, Mr. Richard Quashigah, asked a question on what the government was doing about the project.

The minister stressed that the government was committed to ensuring that the project was completed, but said due diligence and quality would not be compromised in the haste to do it.

"For now, we are on feasibility studies, and in some jurisdictions this can take between two and four years; you do not segregate this stage from putting up the infrastructure," he said.

Explaining further, he said the government was looking forward to executing the project on a public-private partnership (PPP) basis to allow for a would-be investor to put up the place.

When Mr. Quashigah drew the minister’s attention to a feasibility project that was conducted on the Keta Port project in 2015, the minister made the case that the study was done by a private entity and the government could not rely on that to put up the port.

He said the feasibility studies being conducted by the consultants was not to determine whether the area was fit for a port or not, as the GPHA had already done some work in that regard.

"We contracted the consultants to determine the level of infrastructure that can be put there and not whether the place is suitable for a port or not,” he said.

Mr. Asiamah defended the decision by the government to appoint a Director for the Keta Port, saying that it was a prudent move that would facilitate work on the project.

Asked if the director had an operational office, he said he (director) shuttled between the Transport Ministry and the GPHA and also went to the Keta Municipal Assembly when there was work to do there.