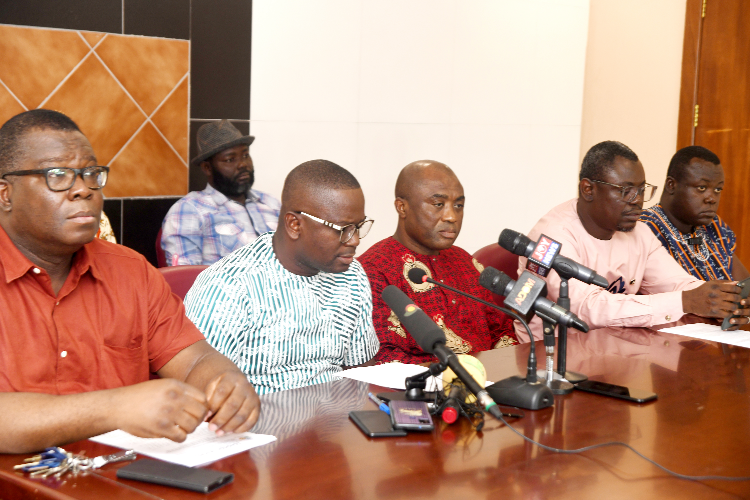 The Ministry of Employment and Labour Relations will on Monday meet the three teacher unions with a view to impressing on them to call off the indefinite strike they declared yesterday.

At a press conference in Accra yesterday, the teacher unions declared an industrial action effective yesterday over the failure of the government to meet their deadline to terminate the appointment of Dr Eric Nkansah as Director General of the Ghana Education Service (GES).

According to them, Dr Nkansah was a banker and not an educationist, hence not qualified to head the service.

However, shortly after the press conference addressed by the President of GNAT, Rev. Isaac Owusu, on behalf of the unions, they were called to a meeting at the Labour Ministry.


After deliberations, the parties could not come to an agreement as the unions asked for time to seek the views of their rank and file before taking any decision to called off the strike.

The Deputy Minister of Employment and Labour Relations, Bright Wireko-Brobby, said as a result, the meeting would continue on Monday.

He said the ministry had a constructive engagement with the unions, adding that the modus operandi of the unions was that they normally would have to seek the mandate of their counsels.

He said the unions said they would use the weekend to engage their counsels and return to the meeting on Monday.

Rev. Owusu noted that the director general’s position was the preserve of educationists and had been occupied by educationists since its creation in 1974 to date, adding that 17 director generals had been appointed to serve at the GES since then with five of them being Professors from academia known to have operated in the education space.

The rest, he said, were all higher officers of the GES even under military regimes; therefore, the appointment of a banker instead of an educationist was a manifestation of the lack of confidence in teachers to manage their own affairs and disregard for an established scheme of service and progression within the GES.

"We have been compelled under the current circumstances to publicly communicate to Ghanaians our intention to go on strike, having reached the November 4 deadline we gave government.
Consequently, we have decided to embark on a strike from today, Friday, November 4, 2022.

"By this we are informing the general public that we are withdrawing our services in the pre-tertiary education institutions," Rev. Owusu said.

The unions also raised concern about the one year contract extension given to a Deputy Director General, Anthony Boateng.

“We stated our opposition to the said contract extension and thereby sounded a note of caution that we would vehemently and vigorously resist any attempt to bring him (Boateng) back into the system and that the consequences of any such attempt may be too dire to handle,” he emphasised, and that it finally cautioned that “should the government fail to heed our call, leadership of the teacher unions would not be able to control the actions or inaction of their members.”