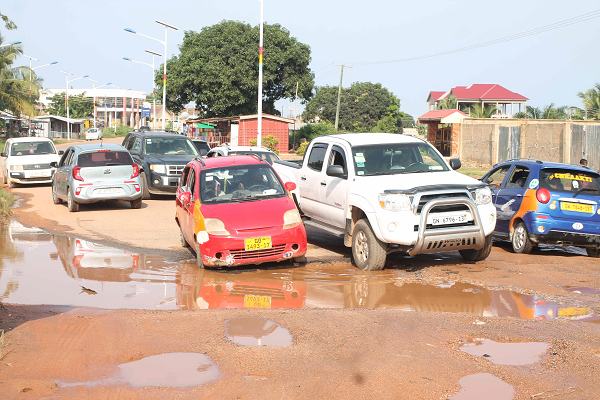 The recent rains have exposed the poor state of many roads in some parts of Accra and Tema metropolises.

A number of tarred roads have had their surfaces washed away, while others had developed potholes and gullies.

Untarred roads have not been spared either, as they are in a terrible state.

Drivers had to meander their way around potholes in order to get to their destinations.

In the attempt to avoid the potholes, some drivers also drive on the shoulders of the road, thereby competing with pedestrians.

In separate interviews with the Daily Graphic, residents, drivers and passengers expressed concern about the situation, and called for the urgent repair of the roads. 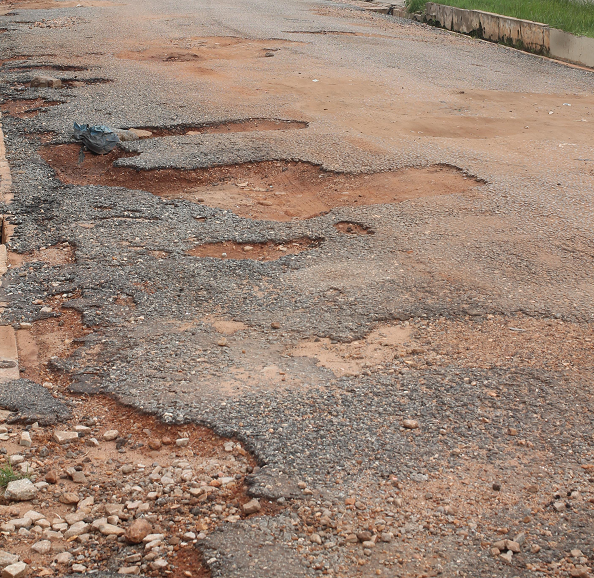 Responding to the issue, the Minister of Roads and Highways, Kwasi Amoako-Attah said the Mobile Maintenance Unit (MMU) of the ministry had been deployed to rehabilitate all roads in the country that had been affected by the recent rains.

He said the MMU, which had been responsible for maintenance works on the country's roads and highways, would continue its maintenance to keep all roads motorable.

At the Hillside, a couple of metres from the Kasoa tollbooth, flooding and loads of silt had gradually led to the destruction of part of the road.

A Daily Graphic’s observation on the road revealed that drivers were using a single lane (outer lane) to avoid driving into the potholes that had developed on the road.

The situation resulted in traffic jams stretching to and from the tollbooths and beyond. 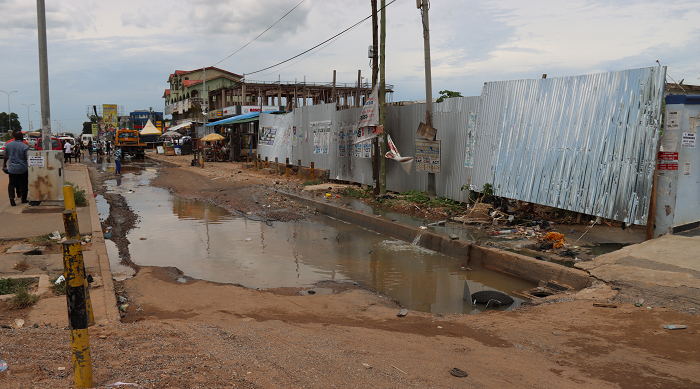 With no help in sight, some residents decided to take matters into their own hands by using pieces of cement blocks and sand to fill potholes in their neighbourhoods.

From Kokrobite to Oshiyie through to the Old Barrier in the Ga South municipality, the road had developed several potholes, resulting in traffic congestion on the stretch.

To compound the problem, at Aplaku, erosion has taken almost half of the road for which reason motorists had to slow down whenever they get there to avoid falling into the gullies.

On the Dr Busia Highway which stretches from Kaneshie through to Mallam, pockets of potholes dotted the road. Sections of the road that were patched had been washed away.

At the right hand side of the traffic intersection from Kaneshie towards Odorkor at First Light, the situation is worse, as a crater had developed following the rains.

Yaw Collins and Yaw Agyeman, both drivers who plied the Kasoa - Odorkor road, said that the entire stretch needed an asphalt overlay to put it in good condition.

“If you are not familiar with the road, you drive straight into potholes, for example at the First Light traffic lights intersection,” Collins stated. 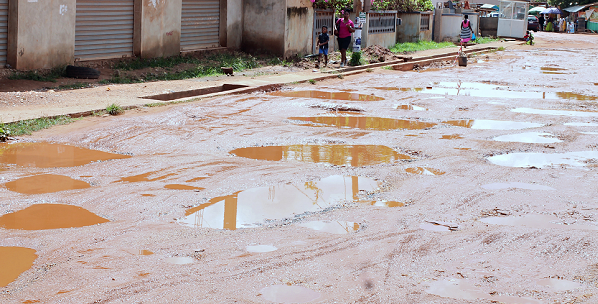 For his part, the Ga South Municipal Roads Engineer, Daniel Sowah, said the assembly was taking inventory of roads that had been destroyed by the rains.

He said the Minister of Roads and Highways had demanded a full report on the affected areas for some interventions.

In the case of the Aplaku road which had been badly damaged, he said the contractor had, as a matter of urgency, been asked to put a culvert across.

“As I speak to you I am with the contractor right now on site. It is part of the intermediary measures we are taking to restore the roads,” he said.

Regarding the long-term plans, Mr Sowah said the assembly was trying to position drains in some of the areas to carry water along.

“As part of our recommendations, we are going to have frequent clearing of the drains in the municipality, “ he said.

A tyre dealer at the Zongo Junction, Eric Ofori, noted that although the road at the traffic intersection had been bad for some time now, the recent rains had worsened the situation.

Some drivers coming through from Agbogbloshie towards the Graphic Road also called for the improvement of the link road.

A KIA vehicle driver who gave his name as Ibrahim, said although it had not rained for some days, the road was still in a very bad state. 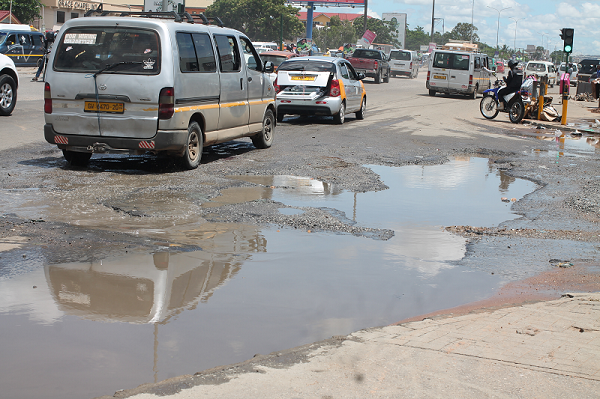 At 3rd Avenue Down through the 4th Avenue at the Greda Estate in Teshie, residents had to fill both sides of a newly constructed bridge to enable vehicles to ply the area.

The situation was not different from the Freedom Shopping Centre at Seventh Avenue.

The un-tarred road at Fertiliser Down and the Alhaji Malik area had become undulating with pools of water at certain places.

A taxi driver, Kojo Fodjour, said he had borne the brunt of the bad road in the Teshie area as he visited the mechanic shop virtually every week to repair one part or another on his car.
Pointing to a damaged beam as he washed the mud off his vehicle, he stated: “The beam holding my left back tyre is damaged and now I have to get another one from an unplanned budget. Aside from that, I have to keep washing the car to keep it nice and attractive.”

An Uber driver, James Coffie, said: “As for the Teshie roads, the least said about them the better. When it rains you can’t use them and this is bad.”

A resident, William Gyedu, said the rains had confirmed that Teshie roads were the worst in Accra. 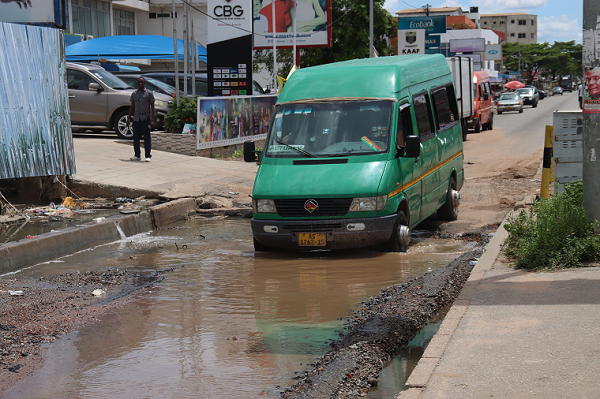 The Municipal Chief Executive (MCE) of Ledzokuku, Mordecai Quarshie, asked the people in the municipality to rest assured that the roads would be fixed.

He said there were elaborate plans to work on the roads in the area and that the assembly had even started work on a few of them including the King Cobra Street.

“This year, a lot of road works are going to happen in the municipality. Before the rains, we started filling the potholes and others are going to have asphalt overlays but the rains have come and so it has put everything on hold.

“This year alone we are going to get 40 kilometres of roads surfacing in Ledzokuku,” he said, adding that new roads were also going to be constructed in the municipality.

Mr Quarshie said the assembly had planned to do the work before the rains but unfortunately it was unable to do that.

“But as soon as the rains subside, there will be a major road rehabilitation plus some new roads construction. The government has not neglected the people of Teshie,” he stated.

He said the occasional closure of the main Teshie-Nungua Beach Road due to construction had put pressure on the inner roads.

For example, he said although the inner roads were not meant for bigger vehicles such as articulated trucks, those vehicles used them because of the construction on the beach road, leading to their deterioration.

In Tema, the Daily Graphic’s tour within the city revealed the deplorable state of some roads that link the communities.

Some of the potholes on the roads had deteriorated over time to become receptacles for pools of water whenever it rained.

In order to avoid falling into the craters along sections of the road, motorists were forced to drive on the shoulders of the road.

Along the Tema-Aflao Highway, there were a number of big holes just after the Ashaiman roundabout towards Afariwa Junction.

The potholes have become a major cause of gridlock, especially for Tema-bound vehicles.

The state of the road from Ashaiman Roundabout to TT Brothers Traffic Light area via the Bethlehem Road had also become a serious challenge for motorists and residents.

Potholes and crevices had riddled most roads, particularly, the Tema General Hospital Road bypass towards T’Havana Gardens, the VALCO Roundabout to Sanyo Road stretch in front of the Industrial Area Fire Station, and the turn towards the offices of the DVLA from Nestle Ghana Limited.

Residents complained bitterly about how the bad roads were affecting their businesses and livelihood in different ways.

A resident of Gulf City, Isaac Adjetey, said anytime it rained, the road was usually flooded, making it difficult for residents to use it.

Officials of the Urban Roads Department were unavailable for comments on the situation.

Some residents of Community 25 in Tema appealed to the authorities to fix the lights on the motorway and the Kpone road to help drivers avoid potholes.

Besides, they called for action to be taken on the malfunctioning traffic lights on the Kpone road.

According to them, the terrible traffic at the Kpone barrier lasted till after 10p.m. daily.