Let's not allow political differences to undermine bond between us - Asantehene 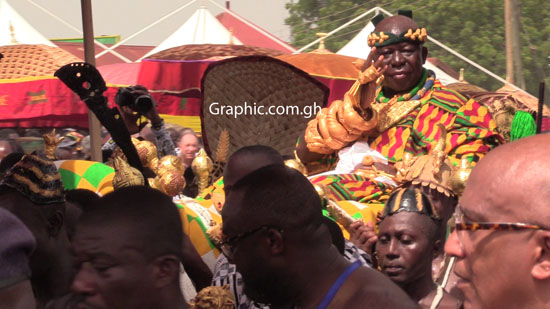 The Asantehene, Otumfuo Osei Tutu II, has called for a spirit of a resurrected and resurgent Ghana united by a common heritage and peace.

He said the presence of the Awomefia of Anlo state, Torgbui Sri III and his kinsmen at the Akwasidaekese, the first ever, provided a clear sign of a new state that was brewing in Ghana.

Otumfuo was addressing dignitaries at the Dwabirem of the Manhyia Palace, to mark his 20th anniversary since ascending the Golden Stool in Kumasi on Sunday.

He said political differences has plunged the relationship between the two states and said it was time for them not to allow politics to undermine the bond that had existed between the two since 1824.

The Asantehene said by extension the country must remove any artificially contrived discord likely to undermine the stability of the nation.

He appealed to President Nana Addo Dankwa Akufo-Addo and all political parties to let this new signpost between the Asantes and Anlos to "guide us to our destiny which is a vibrant Ghana developing in peace and harmony."

Otumfuo said it was time to deal all with kinds of rancour, bitterness and violence out of "our political discourse and allow the nation to embrace a new era of peace."

On that momentous day, Barima Kwaku Dua, as he was then called, held in his right hand the Busumuru sword, and with his kuntunkuni (black cloth) dropped to his chest, swore the oath of Asante to be faithful to his people

Akwasidae Kɛseɛ is an expanded form of Akwasidae, celebrated every six weeks in line with the Asante calendar which is based on a cycle of 42-two days and nine months in a year.

The Akwasidae Kɛseɛ is celebrated every five years to crown all the Adaes.

Sunday's Adae was the fifth since the Otumfuo Osei Tutu II ascended the throne.

President Akufo-Addo, mentioned, in particular, Otumfuo's role in bringing lasting peace to the people of Dagbon and promoting a united Ghana and wished him well.

Kumasi witnessed a cultural extravaganza on Sunday, April 21, when the Asantehene, Otumfuo Osei Tutu II, marked the 20th anniversary of his coronation with a grand durbar on Akwasidae kɛseɛ.

The occasion was the high point of the anniversary and thousands of Asantes and well wishers from across the  converged at Dwabirem of the Manhyia Palace for the event and shared in the joy and glory of the anniversary.

The Asantehene, in all his royalty and elegance, rode in a palanquin from the Palace to Dwabirem amidst the firing of muskets.

As  an opportunity was given to the chiefs and invited guests to pay homage to the Asantehene who sat in state.

The Asantehemaa, Nana Konadu Yiadom III, also rode in  to the drubar grounds.

Before Otumfuo Osei Tutu delivered his anniversary speech, the Vice President of Suriname and President Akufo-Addo took turns to praise him for his exemplary leadership. 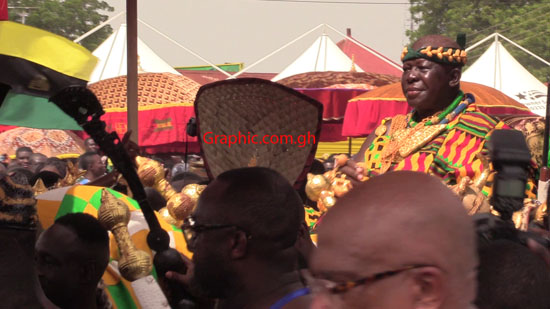 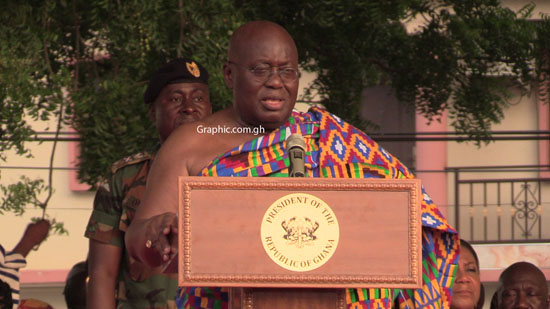 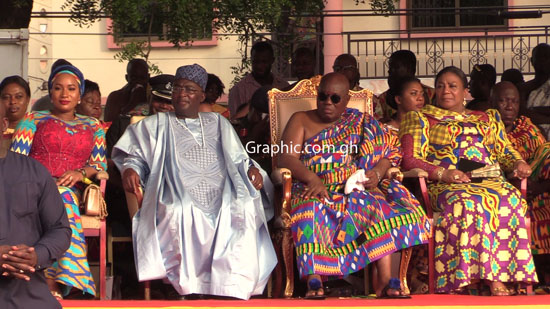