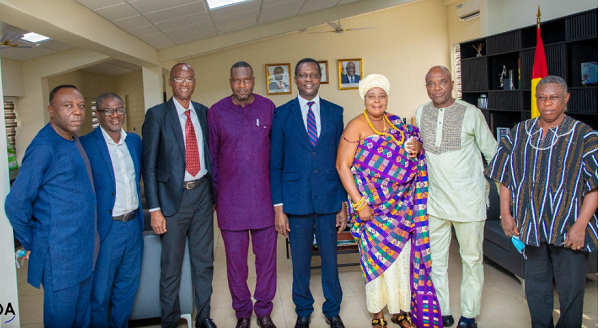 The Minister of Education, Dr Yaw Osei Adutwum, has cautioned the public to desist from politicising the intended transformation of the Ghanaian educational landscape.

He explained that the transformation was in the interest of the nation, and did not consider the political affiliation, ethnic orientation, religion and other social circumstances of beneficiaries, stressing that plunging it into politics could derail that effort.

Dr Adutwum gave the caution when the board chairman of Sogakope Senior High School, Maxwell Amekpor, led members of the board to pay a courtesy call on him in Accra last Monday.

The aim of the visit was to invite the minister to the 60th anniversary of the school, which would be climaxed on November 26 this year in Sogakope, the South Tongu District capital, in the Volta Region.

The Education Minister expressed the hope that if the ongoing education transformation was allowed to continue for a couple of years the country would develop on the back of the right measures being rolled out to leapfrog the national economy.

He stated, for instance, that when supported fully, Science, Technology, Engineering and Mathematics (STEM) education would soon turn the nation’s education around and ultimately impact the economy positively to
improve the standard of living of the average Ghanaian.

Dr Adutwum appealed to the public to embrace STEM education, saying it held the magic wand that could turn things around for accelerated development.

He pledged to ensure that all infrastructural projects at SOGASCO receive support to enhance effective teaching and learning.

Dr Adutwum said the three science laboratories in the school would be refurbished and supplied with all the equipment and materials.

He also promised to make SOGASCO a model science school to increase enrolment in
science.

The Board Chairman of the school lauded the education minister for the development he had brought into the country’s educational sector.

Mr Amekpor appealed to the government to consider improving the school’s infrastructure to accommodate the growing population of the school.

He also appealed for a bus and a pick-up truck for the school, as well as an assembly hall complex for the school founded in 1961 under the Ghana Government Education Trust schools.

Other members of the delegation were the Headmaster, Newman Dzesedzoave; the Assistant Headmaster, Cephas Sokpah; Queen Mother of Tefle Traditional Area, Mama Azivui III, and the National President of the OldStudents’ Association, Maxwell Lukutor.