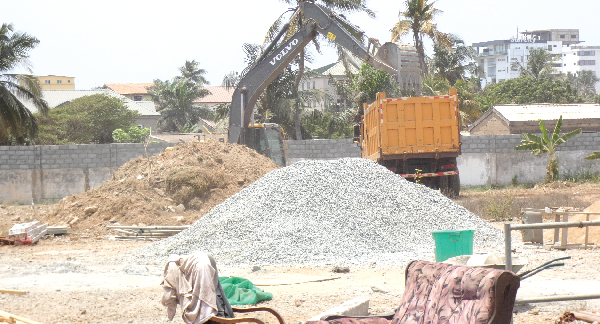 Work on the reconstruction of the La General Hospital has started, almost 19 months after a sod-cutting ceremony was performed for the commencement of work.

This was after the Minister of Health, Kwaku Agyemang-Manu, signed off the development plan of the general hospital last Friday.

After signing the redevelopment plan of the project at his office, the minister led an entourage to inspect the project site.

At the site, the Daily Graphic observed earthmoving machines excavating, two concrete mixers, construction materials, as well as labourers working on window frames for the building.

Estimated to cost €56 million, the 164-bed hospital project is being constructed by the Poly Changda Overseas Engineering Company Limited, a Chinese construction firm, and expected to be completed in 30 months.

The signed master layout of the facility comprises the main hospital building and accommodation of 12 two-bedroom units and 14 one-bedroom units, both of which come with a living room, kitchen, toilet and bath for some staff members, including middle management.

Also included in the plans are an oxygen production plant, a services building, a mortuary and a car park.

The minister explained that the hospital, which was scheduled to be built two years ago, stalled mainly due to the COVID-19 pandemic and its affiliated financial challenges.

Aside from that, he said, there were challenges in securing some of the materials necessary for the construction which further delayed the completion of the project.

Mr Agyemang-Manu appealed to the residents of the area to cooperate with the contractor and also bear with some of the inconveniences that might result from the construction works.

“The residents should exercise restraint. You might see some inconveniences but you will have to live with them and accept the situation as a challenge,” he added.

The health minister said he was aware of the noise bulldozers and other heavy construction equipment such as trucks carrying sand and stones would present to the residents, adding that they would have to “stomach” some of the inconveniences.

“It is a public good that will serve the interest of all of us. So they will have to stomach the inconveniences for all of our good,” Mr Agyemang-Manu entreated.

In August 2020, President Nana Addo Dankwa Akufo-Addo cut the sod for the construction of the La General Hospital Redevelopment Project to start.

The project was in response to calls to rebuild the dilapidated structure which was not suitable to serve the health needs of the locals of the La community and its environs.
Besides, its structural integrity had become weak.