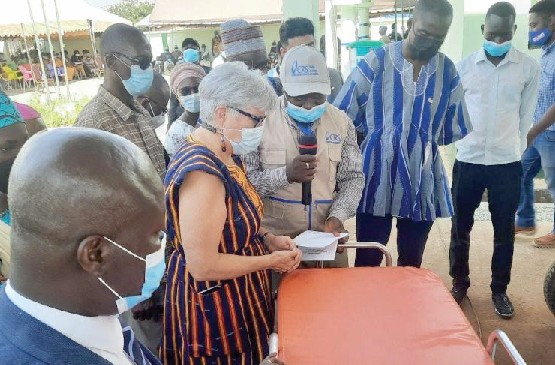 Mr. Daniel Mumuni (with mic), Country Representative of CRS, explaining how the dispatch ambulances operate to Ms. Sullivan (2nd from left), US Ambassador. With them is Prof. Ahmed Zakaria (left), CEO of the Ghana Ambulance Service

An Emergency Dispatch Centre (EMC) has been inaugurated at Gushegu in the Northern Region to improve on the emergency response system and health care delivery in the area.

The facility, is fully furnished with a digitised command centre to field emergency calls and dispatch ambulances.

It will help strengthen the referral process, especially at the pre-hospital level, and link patients who require emergency services with health facilities.

The centre was constructed by the Catholic Relief Services (CRS) and United States Agency for International Development (USAID), with support from the Ghana Ambulance Service and the Gushegu Municipal Assembly.

The US Ambassador to Ghana, Ms. Stephanie Sullivan, joined the Chief Executive Officer (CEO) of the National Ambulance Service, Professor Ahmed Zakaria, and the Paramount Chief of Gushegu, Naa Mahamudu Abdulai Shitobu I, to inaugurate the facility last Tuesday.

At the inauguration, the Country Representative of CRS, Mr. Daniel Mumuni, said the facility formed part of the Acute Care and Emergency Referral Systems (ACERS) project implemented by the CRS and its partners in the district.

He said it would support the attainment of key health systems and improve on maternal health care delivery.

For his part, Prof. Zakaria said the Gushegu centre was the first rural EMC in the country, as all emergency centres were at the national level.

He said aside from tackling maternal mortality, which was its core target, it would help to improve on the emergency response system in the area.

Ms. Sullivan expressed the US government's commitment to support Ghana to improve on health care delivery in the country.

She said the intervention would contribute significantly to the attainment of the Sustainable Development Goal 3 (SDG3), which sought to ensure healthy lives and promote wellbeing for all.

She also appealed to the people and personnel at the centre to put it to good use to enable the centre to serve its intended purpose.

The Municipal Chief Executive (MCE) for Gushegu, Mr. Yaja Dawuni Robert, commended the various partners for the project and pledged to ensure that the facility was regularly maintained.