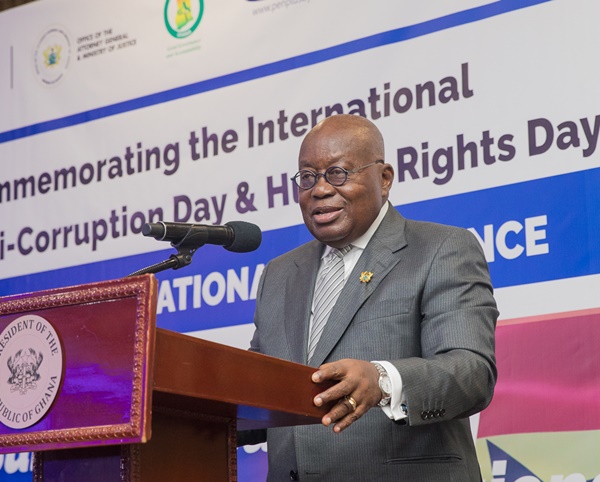 President Nana Addo Dankwa Akufo-Addo says his government has undertaken the boldest initiatives since independence to reform and strengthen the capacity of the nation’s institutions to tackle corruption in the public sector.

According to President Akufo-Addo, “government has fought corruption not in words, but in concrete deeds. We have shunned mere exhortations and showy denunciations of unproved corruption. It has been a holistic approach.”

Delivering the keynote address at the National Anti-Corruption Conference, organized by the Commission for Human Rights and Administrative Justice (CHRAJ), on Friday, 10 th December 2021, the President stated emphatically that “we have protected the public purse, we have made institutional reforms, we have enacted additional, requisite laws, and we have resourced more adequately the accountability organs of state. Our fight against corruption has been grounded on legislative, financial and institutional action, and not on lip-service.”

Outlining the initiatives put forth by his government, since coming into office in 2017, he stated that he has, first, had to make sure that every single alleged act of corruption levelled against any of his appointees have been investigated by independent bodies, such as CHRAJ, the CID, and, in some cases, by Parliament itself.

Citing the example of the suspension of the then head of the Public Procurement Agency, the President indicated that “following recommendations from CHRAJ, based on their investigation, I removed him from office in October 2020, and the Office of Special Prosecutor is seized with the matter of prosecution. If an appointee is cleared of any wrongdoing, the evidence adduced and recommendations made by these agencies, after the investigations are concluded, are what clear the accused persons, not myself.”

Continuing, President Akufo-Addo indicated that “there are some who refuse to accept my method of proceeding, and have characterised me as a ‘clearing agent’, because, for them, the mere allegation without more is enough to merit condemnation of the public official, even though they did not apply this principle when they were in office. For my part, I will not set aside due process in the fight against corruption, no matter how much opprobrium this incurs for me.”

He told the gathering that his government has ensured the passage of the Right to Information Act, 2019 (Act 989), which will foster a culture of transparency and accountability in public affairs.

In addition to this, President Akufo-Addo revealed that Parliament has passed the Witness Protection Act, 2018, (Act 975), to which he gave his assent on 24th August the same year.

The Act, he explained, established a Witness Protection Agency to establish a witness protection scheme as a vehicle for offering protection to persons, who are required to co-operate with law enforcement agencies as witnesses in the investigation and prosecution of cases, particularly corruption cases affecting public officers.

Last year, he stated that the Criminal Offences (Amendment) Act, 2020, (Act1034), was passed to amend section 239 of the Criminal Offences Act, to categorise the offence of corruption, previously a misdemeanor, as a felony, and to guarantee stiffer punishments of terms of imprisonment of not less than twelve (12) years and not more than twenty-five (25) years in prison.

Touching on the allocation of resources to the accountability institutions of State, President Akufo-Addo stressed that “it is also an undeniable fact that budgetary allocations for institutions actively engaged in public sector accountability, i.e., the Office of the Auditor-General, the Judiciary, Parliament and the Ghana Police Service, have witnessed unprecedented increases since I assumed office in 2017”.

These figures, according to President Akufo-Addo, “reflect my resolve to ensure that institutions of state of relevance in the anti-corruption agendum are properly equipped to discharge satisfactorily the mandate of their offices”.

On ensuring value for money through the review of single source and restricted tender applications, he stated that the Public Procurement Authority, between January 2019 and August 2021, recorded savings to the tune of GH¢2.3 billion.

“In 2017, my first year in office, the savings, made over the year as a result of such reviews, amounted to some eight hundred million cedis (GH¢800 million). Contrast this to the situation in 2016 where a grand total of zero savings was made,” he added.

“The establishment of the Office of Special Prosecutor represents the most courageous measure by any government, since independence, to prosecute corruption in the executive arm of government. The monopoly of prosecutorial authority by an Attorney-General, hired or fired by a President, had been identified by many as a key factor standing in the way of law enforcement and prosecution as a credible tool in the fight against corruption before 2017,” he added.