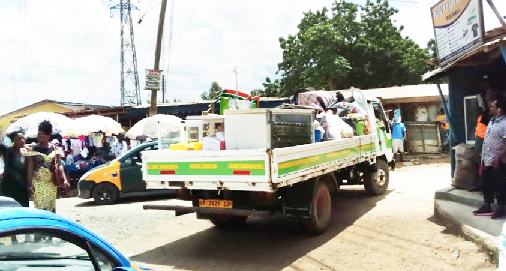 FLASHBACK: Some residents of the Buduburam Camp leaving following the expiration of deadline on September 30, 2021

The government has put on hold the intended demolition of the Gomoa Buduburam Refugee Camp to give the Ghana Refugee Board (GRB) some time to evacuate about 400 Liberian refugees from the place.

The Executive Secretary of the GRB, Mr. Tetteh Padi, said the refugees would be evacuated to a refugees camp in the Western Region once the shelters being renovated for occupation were ready.

It is not clear at the moment, however, when the renovation works would be completed or how soon the camp in the Western Region would be ready for occupation.

The grace period, Mr. Padi said, was also to give residents of the area some time to relocate.

He, however, confirmed to the Daily Graphic yesterday that the demolition had only been put on hold and that it would be carried out eventually.

At a meeting at Gomoa Potsin in the Central Region on August 3, 2021, the Gomoa East District Security Council (DISEC) resolved and further directed that individuals and groups living in the defunct Liberia Camp at Buduburam should vacate the area, latest Thursday, September 30, 2021, to pave the way for the demolition of the area.

An eviction notice dated August 3, 2021 was issued by the assembly to that effect.

Mr. Padi said the government was, however, sensitive to the fact that the people, who were all not necessarily refugees, had lived at the camp for years and needed to be given some time to pack out.

He said the actual refugees were being engaged and registered since not all of them might want to move.

At the end of 2012, Mr. Padi explained, the refugee status of nearly all the Liberians came to an end with two options — either they returned home with assistance or stayed in Ghana and lived with some little bits of assistance in the beginning after which they would be able to work and take care of themselves.

“We call them local integration, so they were given Liberian passport and residence permit to stay here, but they were told to leave the camp because that land did not belong to government,” he said.

The camp has become a settlement and now bears the infamous credential as a hideout for social deviants, including alleged robbery gangs.

The Chief Executive of the Gomoa East District Assembly, Mr. Solomon Darko-Quarm, had earlier told the Daily Graphic that the demolition of the camp was in response to a request by Gomoa Fetteh chiefs over the alleged increasing criminal acts in the Gomoa area, with the camp supposedly turned into an abode for suspected criminals.

Some residents of the camp began leaving the place following the expiration of the September 30, 2021, deadline to evacuate from the area.
However, others were adamant, saying they should be given enough time to leave since they did not have anywhere to go.

Some persons, mostly Liberians, protested the decision of the assembly to evict them.