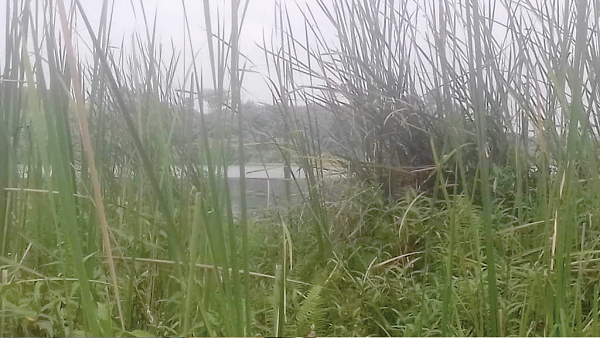 A portion of the encroached Barekese Dam

A concerned youth group of Amoaman within the Barekese Dam enclave in the Ashanti Region has petitioned the Asantehene, Otumfuo Osei Tutu II, to detail a security detachment to the dam site to monitor, arrest and deal ruthlessly with miscreants encroaching the land near the dam.

The youth said the future of the dam looked bleak and the region might have to rely on other regions for potable water if human activities by the dam site were not stopped.

They said the previous makeshift security arrangements had not solved the problem and it was time a permanent security plan was rolled out to deal with the situation once and for all.

"Our future is being mortgaged wrongly and if care is not taken, we may have to import potable water in the future.

"It is the reason why we thought it wise to inform the Asantehene officially for action to be taken," Mr Kwame Afram, secretary to the group told journalists after a tour of the site.

"We will not sit for such a tragedy to happen to the Ashanti Region and the country at large since the dam is the main source of water for the region and the surrounding communities," he added.

Sadly, he said, the forest reserves around the dam had been converted into cocoa farms and all trees planted along the banks had been felled, exposing the dam to the weather.

Mr Afram accused chiefs around the area of deliberately selling lands to prospective estate developers to the neglect of the welfare of the people.

"It is the respect we have for the Asantehene and the laws governing the country that have restricted us all these years else we would have dealt with such deviants our own way," he said.

"We are by this press conference appealing to our local chiefs behind this disgraceful act to desist from it else we may be compelled to form some kind of group to defend this asset," he warned.

"We know once this petition gets to Otumfuo, chiefs who may be found to be involved will be dealt with to serve as deterrent to others," Mr Afram said.

The Organiser of the Concerned Amoaman Youth, Mr Osei Kwadwo, called for calm among the indigenes, some of whom had threatened to take the law into their own hands to stop the private developers and farmers.

He said once the matter had been relayed to Otumfuo, it would be unwise and disrespectful to embark on such a venture.

He noted, however, that while waiting for a response from Otumfuo, the youth said they would be on the lookout for such deviant characters and report them to the police and officials of the Ghana Water Company Limited.

While waiting for action from Manhyia, the group has decided to embark on an aggressive tree planting exercise at the "untouched areas" along the banks to save the dam.