4 Perish in 2 fires in Ashanti Region 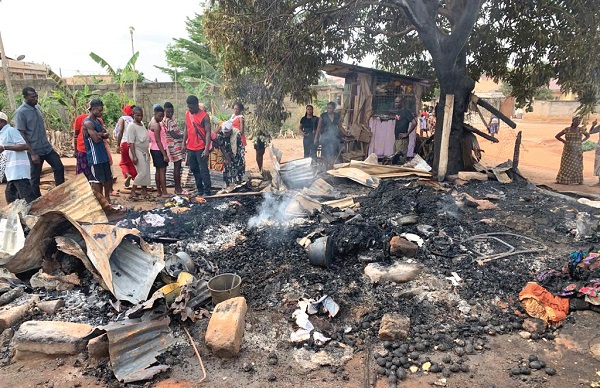 Four people have lost their lives in two separate fire incidents in the Ashanti Region.

Two males and two females lost their lives when their houses were engulfed in fire that burnt them to death.

In the first incident which occurred in the early hours of Friday at Gyinyase, 51-year-old Godfred Afenyo and his 42-year-old wife, Happy Danso, were trapped in the fire when the wooden structure that served as their residence caught fire.

The structure was razed to the ground killing the couple in it.

In the second incident which also occurred on the same day at Mampong Worakese, 90-year-old Madam Agyaponma and her 11-year-old grandson died when their five-bedroom apartment caught fire.

The two bodies were burnt beyond recognition in the fire that swept through the house.

The bodies of the deceased have since been deposited at the Mampong Government Hospital and Komfo Anokye Teaching Hospital respectively.

Confirming the incidents to the Daily Graphic, the Ashanti Regional Public Relations Officer of the Ghana National Fire Service, Divisional Officer III Peter Addai, said in the Gyinyase incident, although the personnel got there on time, the intensity of the fire was such that by the time they managed to control it, most of the building had been consumed.

However, in the second case, he said the people delayed in calling the service.

He said the people tried to control the situation and only called in the Fire Service when it was getting out of hand.

He said they could have saved the lives of the two had the people called the service earlier.

Meanwhile, he said the causes of the fire were being investigated.