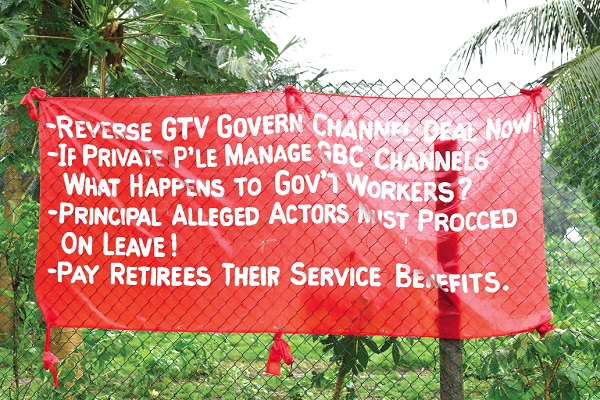 There was confusion at the Headquarters of the Ghana Broadcasting Corporation (GBC) yesterday when some unionised staff hoisted red flags and banners in protest against alleged moves to sell some of the state broadcaster’s channels to private investors.

For more than eight hours the flags and banners, some with strong messages, hung on trees until tension began to mount, as some security men of the company nearly clashed with the protestors.

Later, some soldiers said to be stationed on the premises joined the security men to remove the banners.
Some of the workers who could not fathom the motive behind the soldiers’ action, strongly voiced their frustration.

The workers described the action of the soldiers as untenable and said the union was drafting a formal protest letter to the Military High Command.

Apart from hoisting red flags, some of the workers also wore red attire and armbands to begin what they called “the journey to stop the illegal sale of GBC channels”.

The workers alleged that, the management had allegedly sold GTV Govern to KBL Media of the Jospong Group belonging to businessman Mr Joseph Siaw Agyepong. They described the deal as “stinky”.

Besides, the union alleged that plans were in place to sell GTV Sports Plus to Star Times, a Chinese-owned company, while Obonu TV, a channel dedicated to the Ga community, was to be sold to the McDan Group of Companies.

According to the union, some of the workers could lose their jobs if the channels were sold out to private persons.

The Greater Accra Workers Union is taking its case a step forward with a petition to the National Media Commission (NMC).

In the petition dated July 4, 2019, the unionised staff queried the nature of the deal that merged the staff of GBC 24 and GTV Govern and the renaming of GTV Govern as GBC News.

“We want to know what has become of the platform that used to host GTV Govern? Has it been sold to the Jospong Group of Companies, as our checks reveal?” it asked.

“We have also observed that when staff tune in to the GTV Govern frequency (dial), a new name, Adwenpa TV, popped up, indicating it was on test transmission,” it added.

“Who owns that channel and who are the workers of that channel, which originally belongs to the state?” the petition asked.

The union also questioned the procurement process involved in the alleged deals.

It said per the country’s procurements laws, unless in emergency situations, all sales and contracts involving state agencies must go through a tender process.

“Unfortunately, GBC management did not indicate or announce publicly or invite other well-meaning Ghanaians who might have been interested in reaching an agreement with GBC to the same effect to apply for tenders,” it said, adding: “The processes leading to the selection of the Curvet channel on the platform were shrouded in secrecy.”

The petition also sought the intervention of the NMC to know whether plans were in place to sell off Obonu TV, allegedly to the owners of the MacDan Group of Companies.