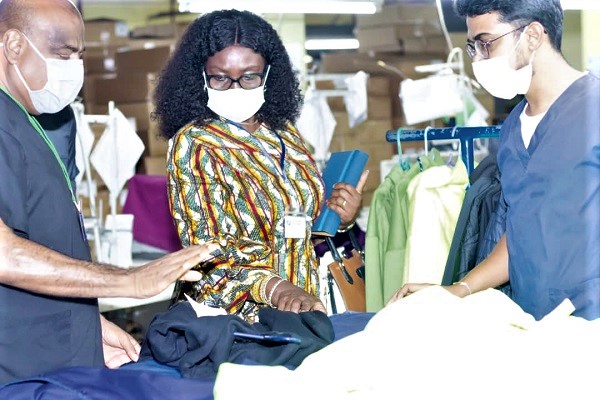 The Sector Chairperson, Garment, Textile and Leather of the Association Ghana Industries (AGI), Mrs Doris Nana Kesie, has commended the government for the support to garment and textile industries during the peak stages of the COVID-19 pandemic.

She said during that period, the sector was chosen by the government to produce over three million face masks for the public.

The Sector Chairperson said this during a familiarisation visit to Maagrace Garment Limited in Koforidua in the Eastern Region.

She said Maagrace Garment Limited, which was the only company located outside the Greater Accra Region, was one of the five companies which undertook the production of the face masks

The initiative, she said, created jobs for the youth and enhanced the transfer of technology.

Mrs Kessie expressed delight about the company's intention to explore other sources of power like solar to enhance efficient production.

She disclosed that plans were far advanced to roll out training programmes for its members in the coming months, especially as the operations of the African Continental Free Trade Area (AfCFTA) gathered momentum.

She indicated that the AGI was committed to supporting its members to grow their businesses in a bid to sustain jobs and boost the sector.

The Technical Director of Maagrace Garment Limited, Mr Paul Allen, stated that the company was committed to being an ethical, sustainable, efficient and trusted apparel manufacturer in West Africa.

Mr Allen informed the delegation that the safety and welfare of employees was a major priority, and that they believed the workforce had critical role to play in the growth of the company.

The General Manager of Maagrace Garments Limited, Mr Krishantha Silva, expressed the hope that the company would expand its operations to employ more people in the locality.

This, he said, would be done in partnership with Ethical Apparel Africa, a United Kingdom-based and Ghana-registered sourcing and manufacturing company, driving the future of industries in Ghana and Benin.

The Regional Chairman of the AGI in charge of Eastern, Volta and Oti regions, Mr Dela Gadzanku, lauded the management of Maagrace Garments Limited for striving to attain higher standards in the industry.

He said a strong export base would make Ghana to benefit from the AfCFTA initiative.