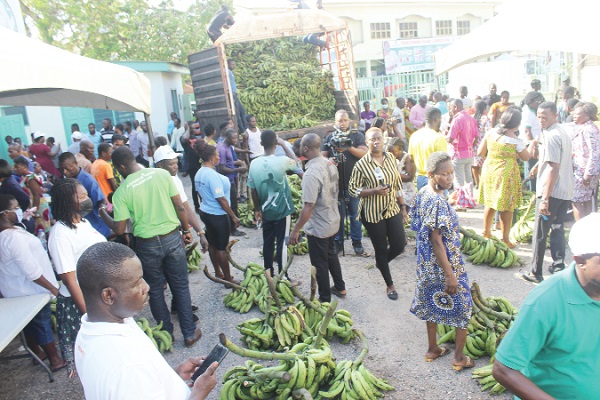 MoFA is rolling out an intervention programme at the Planting for Food and Jobs Market in Accra
30.5k Shares

Cost, more than anything else, could deny some households access to staple and essential food items during the Yuletide.

Despite the intervention by the Ministry of Food and Agriculture to bring some food items from the farm gates to its head office and make them more accessible to the people, the reduction in fuel prices at the pumps, as well as the cedi gaining strength against the dollar, prices of food items remain largely high, a few days to Christmas.

Although the heavy vehicular and human traffic that is characteristic around this time is evident and there is a lot of human movement at the various markets in Accra, many traders are complaining of low patronage of their wares.

This has resulted in some of them adopting sales strategies to attract customers.

For instance, instead of wholesale, many are adopting the retail strategy to sell their various items.

Others are making sure that they are able to spot potential buyers from a distance and convince them to their shops to patronise their items.

Also, some are using music to attract potential buyers.

There are marginal price differentials at the various markets.

A market survey by the Daily Graphic established that the prices of the usual essential food items (rice, chicken, cooking oil and tin tomatoes) consumed during the festivities had more than doubled at some major markets in the Greater Accra Region, including the Agbogbloshie, Kaneshie, Makola, Mallam and Madina markets.

A five-litre gallon of edible oil that was sold at GH¢80 the same time last year is now GH¢185; with the five-litre Sunflower oil currently selling at GH¢210, as against GH¢100 last year, while cooking oil in the big gallon, popularly called the ‘Kufuor gallon’, is GH¢550, as against the GH¢280 it was sold for last year.

Some traders who interacted with the Daily Graphic team indicated that the prices of food items quadrupled in late November when the cedi was about GH¢15 to a dollar.

Many of the buyers the team interacted with also complained of higher prices, compared to last year.

“The large pack of tin tomatoes which used to sell at GH¢15 is now selling for GH¢22.

“A year ago, a carton of imported chicken was GH¢150 and now it is being sold for GH¢340; gizzard, which was GH¢12, is now GH¢31,” a retailer who gave her name as Ama Aboagye told the Daily Graphic at the Makola Market.

Another trader, Hajia Ramatu, who sells rice, oil and other foodstuffs, said she had just purchased foodstuffs worth over GH¢4,000 but had not made any sales as of 1 p.m when the team of reporters talked to her.

"You can have a look at my receipt; I have been here since morning and nobody is buying anything. People are saying we should reduce the prices, yet those from whom we buy in bulk have not reduced their prices yet," she said.

Some of the players in the agribusiness sub-sector who interacted with the Daily Graphic in Accra ahead of the Christmas shared varied opinions on local food sufficiency on the Ghanaian market during and beyond the festivities.

The Chairman in charge of the Agribusiness Sector of the AGI, William Agyei-Manu, said although there was sufficient produce for the market, transportation, coupled with cost of production, had increased the prices tremendously.

He said the food staples that had seen astronomical increases in prices were chicken, rice and vegetable oil.

“We are talking about food sufficiency, which is determined by three parameters — availability, accessibility and affordability. So the question now is: can consumers with low income be able to purchase sufficient food for their homes?

“The local poultry industry could have taken advantage of the fluctuation in the cedi against the major foreign currencies to boost production, but for the high cost of input materials,” he said.

He said the AGI had always advocated an enabling environment that would encourage local production.

He explained that 2022 had been a challenging year for the agribusiness sector, but at the production level there was adequate food in the system to support Ghanaians during the festivities and beyond.

Mr Agyei-Manu noted that the challenge now had been the transportation of the produce from the farm gate to the markets for consumers.

“Unlike 2021, we can assure you that this year we have sufficient food in the system, but the challenge is how to cart the produce from the farm gate or production point to the big markets in Accra, Kumasi and other urban centres where the demand is high.

“This is because the cost of transportation, influenced by rising fuel prices, has affected the food supply chain, and that is why the Ministry of Food and Agriculture has introduced an initiative to start selling foodstuffs on its premises in Accra,” he added.

In sharp contrast, the General Manager of Wilmar Africa Limited, Kwame Wiafe, whose firm is into local agro-processing, said the local production of rice and edible oil was rather limited.

That, he said, was because the status quo had not changed and that the activities of importers of the two products were still posing a threat to local producers.

He, therefore, underlined the need for the government to work closely with stakeholders in the agricultural value chain to help boost local production in a sustainable manner.

To boost rice production, for instance, he said, the government should partner all stakeholders to ensure that farmers or producers produced quality and well-packaged products consistently for the market.

He said there was also the need to build strong distribution channels, coupled with an intensive campaign to promote and encourage the consumption of Ghana-made rice.

“If the government and other stakeholders work together in the long term, we will be able to produce food items such as rice and edible oil in a sustainable manner for the market.

“We need to see more effort from the government to boost local production. Sometimes when we find ourselves in economic difficulties of this nature, we often make various positive pronouncements to scale up local production, but as soon as we are out of the woods, we tend to forget,” he said.