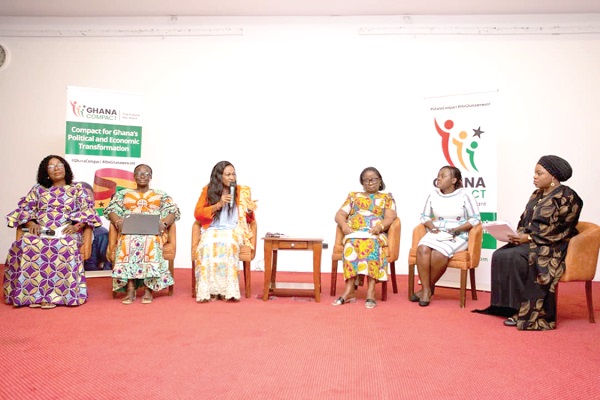 PANELLISTS at a forum in Accra have urged the government to expedite action on gender equality in the country’s economic and political space.

They said the issue of women’s representation at all levels was long overdue, and that the delay in ensuring gender equity was pushing the country away from achieving its political and economic transformation agenda.

They, therefore, called for the passage and implementation of the Affirmative Action Bill to ensure gender parity in government appointments, high-level decision-making positions and in corporate institutions.

They added that the legislative instrument on Land Act should also be developed immediately and an education campaign mounted on its contents to enable women take advantage of the security it provides.The panellists were Director, ABANTU for Africa, Rose Mensah-Kutin; the Executive Director, Henry Djaba Memorial Foundation, Otiko Afisah Djaba, and a Gender and Disability Advocate, Gertrude Oforiwa Fefoame.

The gender experts were speaking during a technical consultation meeting on a Compact for Ghana's Political and Economic Transformation (Ghana Compact) initiative.

The meeting was organised by African Center for Economic Transformation (ACET), in partnership with NETRIGHT, all NGOs in Accra yesterday.

Political will
Ms Djaba called for a strong political will and aggressive lobbying by stakeholders to push for the rights of women.

Mrs Mensah-Kutin also said there was the need for a new character of leadership to achieve gender equality, while Ms Fefoame suggested that disability issues should be included at every level of society for necessary action.

For her part, Ms Abdulai called for a psychological support system for widows and orphans, while stressing the need for institutions in charge of social protection to be well resourced and decentralised.

Ms Kannae emphasised the need for the development of a Legislative Instrument on the Disability Act 2006, ACT 715, to ensure its effective implementation.

Meeting
The President and Founder of ACET, Dr Kingsley Y. Amoako, said the compact was a well-articulated and agreed-upon goals and targets for the country’s governance, political processes, economic management and policies of inclusion for the second quarter of the 21st Century.

“We want to set some goals and targets for the nation and also help build consensus about the fundamental changes that need to be done to secure the future of this country, particularly for our children,” he said.

Dr Amoako further said the compact was an agreement between the citizenry and the government on the development direction of the country, regardless of the party in power.

“As we move to the next election we want to make sure that issues such as gender equality are picked up by our political parties in their manifestos,” he said.

Other issues contained in the compact borders on youth, employment, the role of the private sector and economic transformation.

The Convenor of NETRIGHT Steering Committee, Akosua Darkwah, also called for gender budgeting training for metropolitan, municipal and district assemblies (MMDAs), adding that gender budgets developed at the district, regional and national levels must be vetted for compliance prior to submission to the Ministry of Finance.