The Speaker of Parliament, Alban Sumana Kingsford Bagbin, has called for greater collaboration between the Executive and Parliament to address the myriad of issues confronting Ghana’s maritime industry.

Such collaboration, he said, would help to tackle the threats posed by maritime insecurity, piracy and incidence of illegal, unregulated and unreported fishing (IUU) as well as smuggling and illegal oil bunkering.

“In actual fact, we are all dependent on the sea for its many benefits, including nutrition and there is therefore the need for the Executive and Parliament to work together to address these challenges to safeguard food security, peace and security,” the Speaker said in a speech read on his behalf by the Ranking Member on the Roads and Transport Committee of Parliament, Mr Kwame Governs Agbodza.

The Speaker made the call at the opening of a workshop on Analysing Maritime Security (AMARIS) project in Accra last Friday.

The AMARIS project is a multi-community study that was carried out in the Western, Central, Greater Accra and Volta regions between May 2020 and April 2022 to analyse the various maritime crimes in the country.

The study was financed by the Danish International Development Agency and undertaken by the Kofi Annan International Peacekeeping Training Centre (KAIPTC), Centre for Maritime Law and Security (CEMLAWS), Safe Seas Network and the University of Copenhagen.

The workshop attracted stakeholders in the maritime industry to deliberate on maritime crimes that plagued Ghana’s coast and the threats they posed to human security and the maintenance of peace and stability, particularly in the West African sub-region. 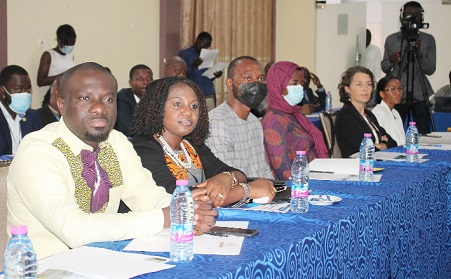 A section of the participants at the workshop

They also discussed capacity gaps and how to ensure that respective institutions received capacity building that were responsive to the maritime governance needs.

Mr Bagbin maintained that strengthening maritime governance would require the need to appropriately build the capacity of Parliament to enable legislators to effectively exercise their oversight responsibilities towards how pressing challenges were dealt with to bolster the sector’s sustainability.

The Danish Ambassador to Ghana, Tom Nørring, said Denmark had a strong presence in Africa, a reason the country was strongly committed to combating piracy and maritime crime within the region.

He noted that nearly 40 per cent of all cargo enroute to Western and Central Africa were transported via Danish-controlled ships of which 29 per cent of such was carried by the Danish shipping company, Maersk Line.

“Actually 11 per cent of all Danish shipping goes to Africa and that is a pretty good reason for Denmark to be involved, engaged, and indeed to be collaborating closely with Ghana and other coastal countries in sub-region on maritime security as we have been doing so since 2016,” he said.

Mr Nørring, however, said Denmark had to remove its Frigate, a naval vessel deployed to the Gulf of Guinea maritime domain to help fight piracy, and redeploy it back home to support NATO’s coordinated efforts in Ukraine following Russia’s invasion of that country.

The Commandant of the KAIPTC, Major General Francis Ofori, said the phenomenon of maritime crime and its threats to West Africa and Africa as a whole was quite alarming

The International Maritime Bureau (IMB), he said, recorded a 40 per cent increase in piracy and armed robbery activity along the Gulf of Guinea in 2020, detailing 132 attacks off the coasts of Nigeria, Benin, Ghana, Gabon and Equatorial Guinea.

“In the first three months of the year 2022, 37 incidents of piracy and armed robbery at sea were recorded as against 38 during the same time frame in 2021,” he said, adding that “these maritime crimes compromise the overall peace and security and stability of the country and its blue economy,” he said.

The Director of Safe Seas Network, Prof Christian Bueger, who is a co-lead on the AMARIS project, said the workshop was necessary for the relevant stakeholders to provide additional inputs to the Amaris project to ensure that the final reports accurately reflected the situations on the ground.