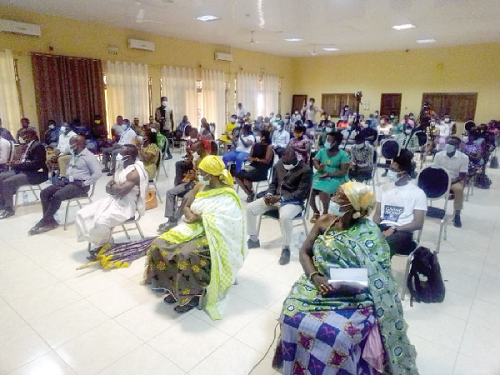 Exclusive breastfeeding for newborns in the Bono Region has declined from 67 per cent in 2008 to 43 per cent in 2017, a Multiple Indicator Cluster Survey (MICS) conducted by UNICEF in collaboration with the Ghana Statistical Service (GSS) has established.

According to the 2008 Ghana Demographic Health Survey, exclusive breastfeeding which was 67 per cent in the region dropped to 52 per cent in 2014 while the 2017 MICS showed a further decline to 43 per cent.

The Bono Regional Director of Health, Dr Kofi Amo-Kodieh, has expressed concern about this trend and wonders why despite the overwhelming benefits of good nutrition associated with exclusive breastfeeding for newborns and appropriate complementary feeding for young children, the percentage of its practice in the region is still on the decline.

Addressing the participants in the launch of the "Start Right, Feed Right" campaign in Sunyani, Dr Amo-Kodieh stated that the campaign drew on the “Stronger with breast milk only” initiative, which was launched regionally in 24 West and Central African countries in November 2019.

He explained that the campaign sought to prevent stunting, wasting and preventable deaths among newborns and young children through advocacy and galvanising public and stakeholder support for breastfeeding and to improve complementary feeding in Ghana.

“The significance of this campaign and the many other reasons why adequate nutrition from birth to two years is vital for child health are not new to many of us,” she said adding that “The survival, growth and development of children can be significantly enhanced if they are breastfed exclusively for six months followed by timely introduction of adequate complementary foods from six months to two years”.

Dr Amo-Kodieh said besides providing nutrients for growth, breastfeeding provided antibodies that protected babies against many childhood illnesses and therefore had the ability to prevent premature deaths in children.

“In the long term, breast milk can prevent the risk of developing non-communicable diseases such as childhood asthma, obesity, diabetes and heart-related diseases,” he stated, explaining that “Mothers who breastfeed their children are less likely to suffer from breast cancers and maternal mortality”.

Dr Amo-Kodieh explained that as a result of the situation, the rate of decline in stunting among children in the region had been slow with over 13 per cent of children still too short for the ages while wasting was on the increase with about one in 10 children being too thin.

He said addressing these problems required the refocusing of public attention on the benefits of breastfeeding and adequate complementary feeding for all children from birth to two years.

“The significance of this campaign and the benefits of adequate nutrition for our children in the first 1,000 days of life must be championed by all”, Dr Amo-Kodieh stated.

Dr Amo-Kodieh said to give prominence to the campaign and set the stage for all stakeholders, the Regional Health Directorate would promote breastfeeding among working mothers with the establishment of breastfeeding corners in all health directorates and district hospitals by the end of March, 2021.

In addition, all unit heads at the regional level and district directors of health were expected to prioritise nutrition for newborn and young child by the end of March, 2021 while medical superintendents were expected to enforce the legislation which prohibited the promotion of breast milk substitutes at all health facilities.