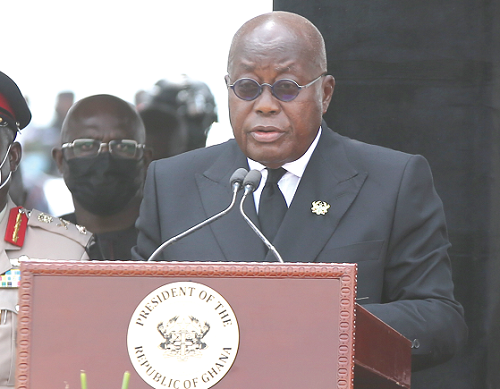 The President said the young Air Force officer burst onto the political scene like a meteor that did not disintegrate but remained potent till the end of its life.

“On the contrary, it remained potent until the very end of its life, leaving strong footprints in the sands of time,” he said about the man he affectionately called ‘Comandante’, a Spanish and Italian expression for Commandant.

President Akufo-Addo’s tribute was delivered at the final funeral rites of former President Rawlings at the Black Star Square to climax three days of national mourning of the first President of the Fourth Republic and longest-serving Head of State.

The solemn event, with full state honours, attracted Presidents, former Heads of State and high-profile diplomats and dignitaries from around the world.

President Rawlings passed on at the Korle Bu Teaching Hospital on November 12, 2020.

He said the turbulent relationship continued after Rawlings was sworn into office as the first President of the Fourth Republic, the historic ‘Kume Preko’ demonstrations, his (Akufo-Addo’s) period as Minister of Justice and Attorney-General and Minister of Foreign Affairs and Regional Integration in the Kufuor administration, to his election in 2008 as the presidential candidate of the New Patriotic Party (NPP), a period which, he said, “was one of open animosity. We did not see eye to eye”.

However, the President said, with time, things changed and they came to see value in each other and understood, to a very large degree, their respective perspectives and noted that their mutual commitment to public service was something they had in common.

He recounted his first visit to Mr Rawlings’s residence in 2012, which he said signified the easing of tensions between them, “leading to a friendship that lasted for the better part of some eight years”.

He said when he was elected President in 2016, former President Rawlings was one of the first persons on whom he paid courtesy calls, adding that right up to the day he was called by his Maker, Rawlings remained a good friend and repository of sound advice.

“I knew that, in moments of difficulty in my Presidency, I could count on his considerable wealth of experience and knowledge. On those occasions, he came through for me,” President Akufo-Addo said.

He said when the clergy called President Rawlings to receive special prayers as the only surviving son during the funeral of the former President’s mother, Madam Victoria Agbotui, at the Forecourt of the State House on October 24, last year, which was their last time together, the former President told the men of God to wait as he invited him (Akufo-Addo) to join him to receive the prayers.

He said President Rawlings whispered into his ears: “I reminded them that they should pray for you too because you had also lost your mother.”

To that, President Akufo-Addo said: “I was touched by that.”

President Akufo-Addo said having served 11 years as a military leader and eight years as a two-time elected civilian President, President Rawlings was fortified in his work by his union with his celebrated consort, “the equally dynamic Nana Konadu Agyeman Rawlings”.

He said Nana Konadu proved to be a sturdy pillar and invaluable companion to the very end, and bore him four children, the eldest of whom, Zanetor, was continuing her father’s tradition of public service.

The President said Mr Rawlings declined an offer he (the President) had made to him in 2017 to have the University for Development Studies (UDS), Tamale, which the former President personally had helped to establish, named after him.

Mr Rawlings had explained that he did not want to have any national monument or facility named after him, while alive, the President recalled.

He said at the 21st Congregation of the UDS two days after former President Rawlings’s passing, he (the President) had expressed his strongest conviction, in spite of Rawlings’s reservations, that such an honour should be accorded Mr Rawlings.

“I am glad that this has found favour with his family and the necessary formalities will be carried out to achieve this. That is the Jerry John Rawlings University for Development Studies, Tamale,” he added.

“Such is the measure of the man that the days associated with his political interventions in Ghana; that is, 15th May, 4th June, 31st December and 7th January, are now significant days on the calendar of the nation.

“But the most significant of them all must be 7th January, 1993, the day that ushered in the Fourth Republic. It is in recognition of this that I decided to commemorate 7th January as Constitution Day on the national calendar.

“It is, perhaps, the greatest tribute a grateful nation can pay to the men and women whose efforts led to the establishment of the Fourth Republic,” President Akufo-Addo added.

He expressed the hope that former President Rawlings would forever remain the longest-serving Head of State in the nation’s history, “for that will mean that the Fourth Republican Constitution and its enshrined term limits have endured”.

The President also recounted the exploits of former President Rawlings in other parts of the world, especially as an African nationalist, saying: “He held unwavering positions on all matters concerning the wider continent of Africa, especially when they involved foreign interference and control of Africa’s destiny, and was quick to voice his views on them.”

Former President Rawlings chaired the ECOWAS Authority of Heads of State and Government, setting the example which had been repeated by all Presidents in the Fourth Republic, he said.

The President and his family expressed their condolences to Mr Rawlings’s wife, Nana Konadu; his children — Zanetor, Yaa Asantewa, Amina and Kimathi — and his entire family for their great loss of “one of the outstanding figures of modern Ghanaian history, a man whose sense of humour was truly infectious”.