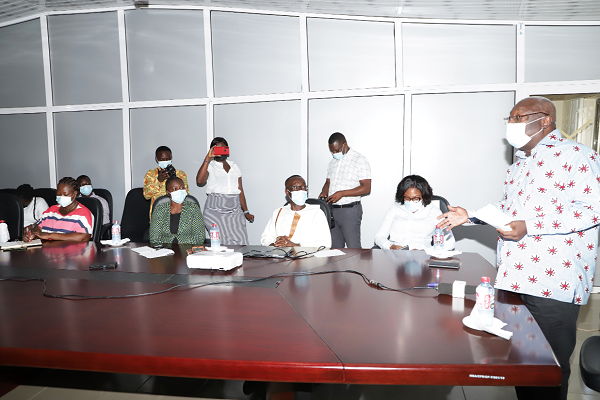 The Minister of Environment, Science, Technology and Innovation, Dr Kwaku Afriyie, has called for a national discourse on genetically modified organisms (GMOs) to see how the country can harness any potential the innovation has to offer.

He said unlike in the past, the national conversation should be based purely on science, devoid of anxieties and rumours.

The minister said this when he engaged the management and staff of the National Biosafety Authority (NBA) in Accra yesterday as part of his familiarisation tour of agencies under the ministry.

Dr Afriyie is using the tour to confer with the agencies on how to build on their achievements to enhance national development.

The Minister said a section of Ghanaians had taken a stand against GMOs based on anxiety and lack of adequate understanding, a development which, he explained, would be prioritised during the proposed national discourse.

Furthermore, a public discourse on GMOs would become a platform to educate the public on what the innovation entailed and its pros and cons, so that stakeholders would be on the same page to influence the right national policy on GMOs, he said.

Dr Afriyie stated that he was neither for nor against GMOs, but since other schools of thought had touted the enormous benefits of GMOs, such as food safety and security, it was critical to bring all the arguments to the table and discuss them at the national level to facilitate policy decisions.

“I am praying for a national dialogue which is not premised on fear or what others are doing but on rational comparison of all schools of thought. If it turns out that GMOs are not good for us, so be it.

“And there are certain organisations that are external and pushing their own agenda, and that is very irritating,” he said.

Citing interferences from some entities in Europe when the country decided to build the Bui Dam as a typical example of the current GMOs scenario, the minister said if the state had concurred, Bui would never have materialised.

“Ghanaians are consuming GMO products, whether we like them or not. Examples are most of the cornflakes from America and other places. So if we say we don’t like them, people import them and we buy and eat them,” he said.

He posited that as far as agriculture and international trade were concerned, “we are losing if we cannot compete”.

“This is why we need to look at all the evidence available to inform an evidence-based decision or national policy,” he added.

Dr Afriyie said the nature of GMOs in the past required strategic efforts at initiating processes that would lead to that evidence-based decision.

Dr Afriyie said GMOs were scientific innovations, and that no country could develop and sustain its development without science, technology and innovation.

Therefore, he challenged professionals to consider joining the political class at a point in time.

“When we have more of professionals from the sciences joining politics, it becomes easier to push the needed science, technology and innovations required to accelerate national development," he said.

The Minister also visited the Nuclear Regulatory Authority, which, like the NBA, had challenges, including lack of its own offices and official vehicles to enhance the delivery of its mandate, the absence of a governing board and low staff welfare.

The minister assured both institutions of his support in addressing their concerns and requested that an official request be made to his office.

Currently, both institutions are being housed by the Ghana Atomic Energy Commission.

Dr Afriyie informed the two agencies that he believed in building strong institution founded on the right infrastructure, human resource and working attitude.

The Director-General of the Nuclear Regulatory Authority, Dr Nii Kwashie Allotey, and the Chief Executive Officer of the NBA, Dr Eric Amaning Okoree, expressed gratitude to the Minister for taking time to confer with them.

They assured the Minister of their support in the application of science, technology and innovation to enhance national development.

Ghana became a party to the Cartagena Protocol on Biosafety after ratifying it in May 2004, with the aim of ensuring the safe use, transfer and handling of GMOs in the country.

This objective draws its strength from the 1992 Constitution, which identifies science and technology as one of the modes to be employed to drive the national socio-economic development.

Based on that, a comprehensive biosafety framework was developed which proposed the Biosafety Bill which was eventually passed into law in December 2011.