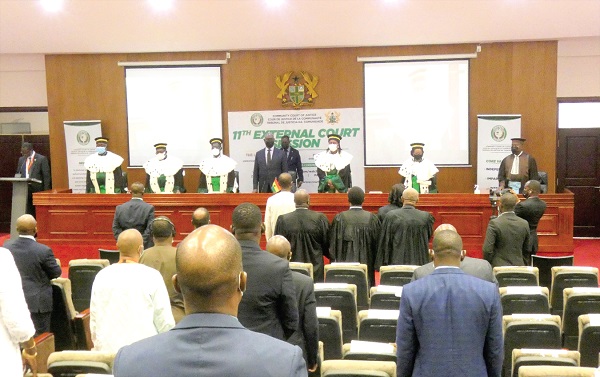 The President of the ECOWAS Community Court of Justice (CCJ), Justice Edward Amoako Asante, has urged member states to enforce judgements delivered by the court.

He said the current compliance rate of the court’s judgments stood at 30 per cent, a situation Justice Asante described as unsatisfactory in spite of the CCJ setting a new record of delivering 20 judgements in a single sitting.

“The compliance rate with judgements of the court remain unsatisfactory and no member state has communicated to the court the status of decisions and judgments complied with so far,” he added.

The president was speaking yesterday at the end of the court’s sittings in Accra which commenced on March 21 this year.

According to Justice Asante, the challenge with enforcement of judgements was not specific to the court, but common to most international courts and tribunals.

This is mainly because like other international courts, the ECOWAS Court does not have coercive power over non-compliant member states, citing the lack of domestication of the Revised Treaty which is the foundational document of the community.

He, however, stressed that the treaty provided that judgments of the court were binding on member states, institutions of the community, individuals and corporate bodies and, therefore, needed to be complied with.

According to Justice Asante, only six member states had complied with Article 24(3) of the Supplementary Protocol of the court which provided that each member state should appoint a national authority for the purpose of reception and processing of the execution.

There was also the presentation of a citation to staff of the Judicial Service, as well as some judges and dignitaries.

Justice Asante commended the government, the judiciary and the media for their immense role in making the 11th sitting of the court a success.

According to him, the court sitting in Accra achieved a success rate of over 90 per cent, adding that “this is no mean achievement; it ought to be celebrated for the progress and impact made in member countries,” he said.

The Chief Justice, Justice Yeboah, entreated the CCJ to extend the mandate of judges and also increase their number at the court to strengthen their capacity to address more cases.

He added that by extending the court’s sitting to member countries, it was making more people aware of its activities while strengthening its mandate and also increasing public trust in the court.

The Chief Justice further urged member states to abide by the rulings of the court, saying “there is no court that can survive the disinterest of the people over whom it has jurisdiction”.