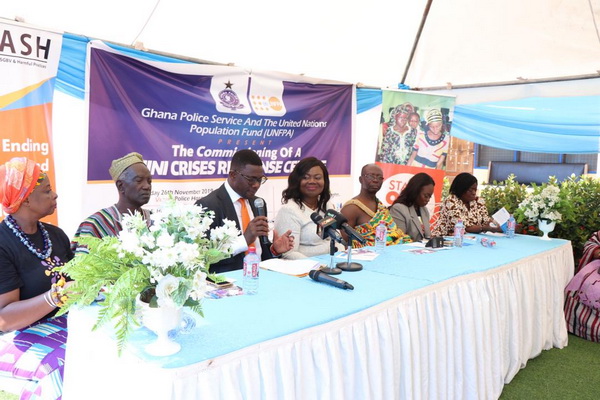 The Domestic Violence and Victims Support Unit (DOVVSU) of the Ghana Police Service has inaugurated a ‘Crises Response Centre’ at the Police Hospital in Accra for survivors of violence and abuse.

The centre will offer essential services to victims of violent crimes such as physical assault, sexual assault such as rape, defilement or any circumstances which directly affect clients who report to DOVVSU.

Victims who report to the centre will benefit from the services of doctors, social workers, counsellors, investigators, crime officers, all at a single location.

Performing the official opening, COP Tiwaa Addo Danquah, Director General, Criminal Investigation Department (CID) of the Police Service said that the centre will serve as a one-stop-shop for victims that report there.

She said the United Nations Population Fund (UNFPA) refurbished the room housing the centre and provided equipment and training to build the capacity of the officers to enable them to serve the public better.

COP Addo Danquah noted that because crime is dynamic, there was the need to continuously update the capacity of police officers to be effective, and thanked the UNFPA for supporting the setting up of the crisis response entre. 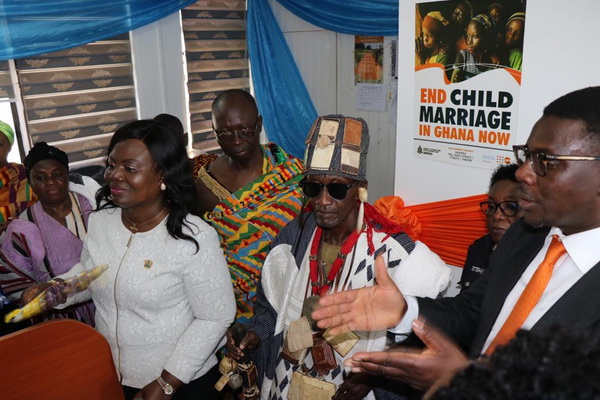 He indicated that gender-based violence stems from unequal power relationships in families and communities and mostly suffered by women and girls, hence the need for effective integrated services for all survivors to ensure that they are well rehabilitated back to society.

Mr Ojuolape further indicated that a large proportion of the teenage pregnancies recorded in the country are actually cases of rape, explaining that, under Ghanaian law, the age of consent for sexual intercourse is 16, “so any girl under 16 years who gets pregnant should be considered a rape case.”

“In Ghana, over 18,000 teenage pregnancies are recorded every year. Children are having children—The law forbids it. It is one of the major sexual violations that must be addressed,” Mr Ojuolape emphasised.

The police, he added, were key to prevent gender-based violence, as even though it involves both women and men, it is mostly suffered by women whose disadvantageous positions expose them to battery, sexual assault, teenage pregnancies and rape.

Mr Ojuolape urged traditional rulers to take a frontline role to take action against rape and all forms of violence against women and girls, as it happens in their communities.

He also encouraged them to equip the girls and boys in their communities with adequate knowledge on their bodies and their sexuality to prevent them from being “sexualised differently” by others and from being innocently dragged into homosexuality, which is becoming rampant.

Holistic support
ASP Foster Nanewotor, a clinical psychologist said DOVVSU set up the centre due to its commitment to provide a set of holistic support for victims of abuse.

The intervention, he said, will increase response time to the victims of violence and also reduce harm and possible loss of lives.

Furthermore, it will enable DOVVSU to respond quickly to immediate threats to the well-being of clients and their families.

ASP Nanewotor appealed that national fund to provide financial support to victims of violence be made functional to enable them access services.

The Northern Region representative on the Council of State, Bona Prof. Yakubu S. Nantogmah observed that gender-based violence is looked on with “benign neglect” even though the problem exists, and called on traditional rulers “to face the problem of violence and find solutions to address it.”

He stressed that the law was not the only means to address gender-based violence and urged traditional rulers to find other solutions to the problem.

Chief of Apirede Akwapim, Neenye Saforo Okoampah III, who chaired the function, called on DOVVSU to publicise the crises response centre so that victims of violence can make good use of the facility so that it serves its purpose.