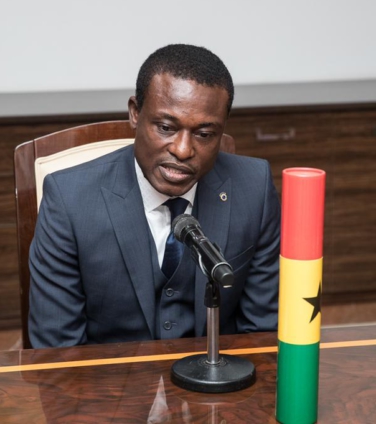 The Office of the Special Prosecutor (OSP) has welcomed the complete reversal of the discretionary discount on the free on board (FOB) value of goods and the home delivery value (HDV) of vehicles effective January 1, 2023.

The OSP has expressed gratification about the new policy but has insisted that "the various investigations commenced by the OSP at the Customs Division would still proceed nonetheless and the Office will monitor the implementation of the new policy."

The Ghana Revenue Authority has reminded all sector commanders of the Customs Division, that the complete reversal of the discount on Free on Board (FOB) value on general goods and home delivery value (HDV) of vehicles is effective January 1, 2023, and therefore they should ensure full compliance.

The move, according to the GRA is in reference to the 2023 Budget Statement and Economic Policy of the Government, which is aimed at raising revenue and also to boost the local productive capacity, introduce policies for the protection and incubation of newly formed domestic industries to allow them to make the goods produced in Ghana competitive for local consumption and also for export.

Per the new policy, discounts on import values have been revised from the prevailing 30 percent for vehicles to 10 percent.

All other goods will have discounts on import values of 30 percent instead of the prevailing 50 percent.

A memo from the Commissioner General of the GRA, Rev Dr Ammishadai Owusu Amoah gave a reminder of the effective date as January 1, 2023 and asked Custom officers to ensure “strict compliance to prevent any possible losses of revenue”.

There is however a transitional arrangement for the provision of storage free period for consignments discharged on December 31, 2022, from arriving means of conveyance to go through clearance without being affected by the reversal policy.

In addition, all pre-arrival declarations processed and tax paid even when the goods have not arrived before January 1, 2023, shall not be affected by the reversal policy.

OSP's gratification, insistence on proceeding with ongoing investigations and monitor the implementation of the new policy.

Reacting to the reversal of the discretionary discounts, the Office of the Special Prosecutor (OSP) expressed gratification.

On August 3, 2022, the Office of the Special Prosecutor published an investigative report in respect of a complaint against Labianca Company Limited and the Customs Division of Ghana Revenue Authority.

A major finding of the investigation, which led to the recovery of GHC1,074,627.15, is that there appears to be an institutionalised culture of lighthearted unconcern regarding impropriety of action at the Customs Division in respect of the grant of customs advance rulings and other rulings regarding the importation of goods - which indicates a high propensity to engender corruption and corruption-related activities.

On the basis of the report, the Special Prosecutor directed the commencement of a wider investigation into the issuance of customs advance rulings and markdowns of benchmark values and an attendant investigation in respect of the auction of goods and vehicles by the Customs Division.

In a statement issued Thursday afternoon (December 29, 2022), the Special Prosecutor, Kissi Agyebeng noted, "with gratification, that following its various investigations and interventions at the Customs Division, the Government has reversed the discretionary discount on the free on board (FOB) value of goods and the home delivery value (HDV) of vehicles effective 1 January 2023."

"The new policy effectively shuts all avenues for officers of the Customs Division to grant discretionary markdowns and removes opportunity for corruption and corruption-related activities," the OSP stated.

"The various investigations commenced by the OSP at the Customs Division would still proceed nonetheless and the Office will monitor the implementation of the new policy."

Attached below is a copy of the OSP's statement

Attached below is a copy of the GRA memo