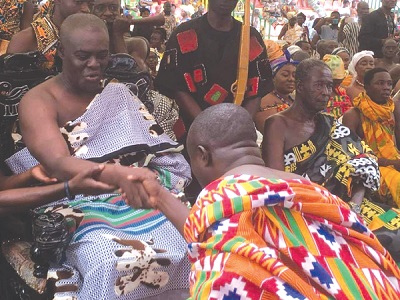 The Bono Regional House of Chiefs has begun the process to set up a development fund to initiate programmes to promote development and reduce unemployment among the youth in the region.

The fund, which is expected to be unveiled in September 2022, will be invested in commercial farming, education and create job opportunities for the teeming unemployed youth in the region.

The President of the House, Osagyefo Oseadeeyo Agyemang Badu II, who is also the Omanhene of the Dormaa Traditional Area, made this known at a grand durbar of a homecoming festival, dubbed Meko Bono (I will go to Bono) in Sunyani last Saturday.

He explained that the house would rely on the chiefs for land to embark on agricultural ventures to improve food security in the region.

Oseadeeyo Agyemang Badu, therefore, appealed to the public, particularly chiefs and people in the region to support the initiative when inaugurated.

The maiden festival, which was held on the theme: "Unifying our people for development through culture," brought together chiefs and people in the Bono and Bono East regions for the historic occasion.

The festival was instituted by some youth in the two regions to showcase their rich culture, project the economic and tourism potentials in a bid to attract investors.

There were several cultural displays to welcome and entertain guests who travelled far and near to participate in the event. 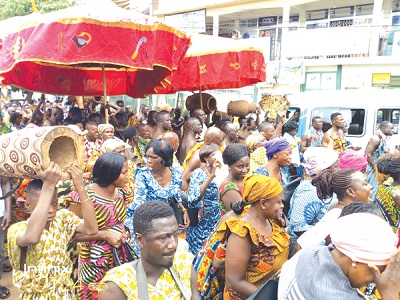 Oseadeeyo Agyemang Badu expressed concern about some individuals who had made it their duty to twist the history of the Bono people.

He, therefore, challenged the Bono people to document their history to prevent such individuals from twisting facts about them.

He advised the people of Bono to portray a good character and avoid the use of abusive language among their peers.

Oseadeeyo Agyemang Badu said the House of Chiefs had resolved to pool resources and unite to support one another to champion development in their communities.

Explaining that the government alone could not develop the country without the participation of the citizens, Oseadeeyo Agyemang Badu also appealed to the people, particularly the chiefs to pool resources to support the development of the country.

He appealed to the government to speed up works and processes for the inauguration of the Sunyani Airport.

Oseadeeyo Agyemang Badu said during a visit to the Presidency, President Nana Addo Dankwa Akufo-Addo promised to speed up the completion and handing over of the airport, as well as its expansion and reminded him to keep the assurance he made to the chiefs and people of the region.

For her part, the Bono Regional Minister, Justina Owusu-Banahene, said the Bono people appeared to have been submerged in the midst of Akans because they felt uncomfortable speaking their language elsewhere.

She explained that the situation had made the Bono people to gradually lose their identity, distinct culture, customs and traditions among other Akan tribes.

Ms Owusu-Banahene commended the deputy General Secretary of the New Patriotic Party, Nana Obiri Boahen, the Minister of Health, Kwaku Agyeman-Manu, Oseadeeyo Agyeman Badu among others for speaking the Bono language wherever they found themselves.

She charged the people of Bono to be confident and proud for who they were because they had played and continue to play major roles in the socio-economic development of the country.

"It is an undeniable fact that the Bono people are the cradle of Akan civilisation and the first Akan group to arrive in Ghana.

"The Bonos, once upon a time, had a place in the pre-colonial era called the Bono Kingdom", Ms Owusu-Banahene stated.

She said in contemporary times, the illustrious sons and daughters had made immense contributions in the security, political and socio-economic development of the country.

She mentioned the late Dr K. A. Busia, Prime Minister of the 2nd Republic, J. H. Mensah, J. H. Owusu Acheampong, James Oppong-Boanuh, Johnson Aseidu Nketiah, A. A. Munufie and Dr Kwadwo Afari Gyan, as some of the sons of the region who had contributed to the progress of the country.

Ms Owusu-Banahene expressed the hope that the festival would rejuvenate and expose the identity of the Bono people.

She said the festival would also serve as a forum where the chiefs would interact with the people on issues affecting Bonos and suggest the way forward.

Ms Owusu-Banahene said the event would help ensure the resolution of most chieftaincy disputes which were likely to affect the development of the region.

She urged chiefs, municipal and district chief executives, Members of Parliament, and entrepreneurs among other professionals to use the festival to enhance the development and project the identity of the Bono people.

Ms Owusu-Banahene urged people in the area to use the occasion to connect, network and share ideas for the progress of the two regions.