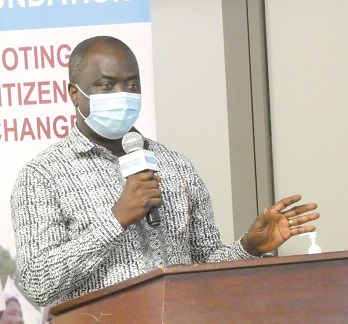 A senior lecturer at the Centre for Social Policy Studies of the University of Ghana, Dr Stephen Afranie, has stated that even though the government has done well in containing the spread of COVID-19, the voices and participation of persons with disability are left out in the process.

He explained that it was for that reason that certain things that were given to PWDs at the time were not relevant to them.

“We gave face masks to people who did not have ears to hold the mask. We set up veronica buckets forgetting that some people, per their disability, cannot access them. We were advocating social distancing forgetting that the disability of some people is such that they need somebody to accompany and guide them as they go out.

“So what arrangement did we make for such people to socially distance? And this is because their voices and participation were not considered in the planning, designing and implementation of the whole intervention,” Dr Afranie said.

Dr Afranie’s statement was contained in a report he presented at a forum on social protection organised by Star Ghana Foundation and attended by civil society organisations (CSOs), non-governmental organisations (NGOs), academia and government institutions.

The forum was dubbed: “Social Protection Mechanisms in a COVID-19 Pandemic: Understanding the intersection of impacts, response and lesson”, while Dr Afranie’s report was a “Review of Government’s Response to COVID-19 and Civil Society Organisations’ Assessment of the Response”.

Similarly, he said even though there were huge contributions from CSOs and the private sector during the pandemic, PWDs were left out in all the institutional structures put in place by government, explaining that while government targeted formal organisations like schools, most people with vulnerabilities were taken care of by the CSOs and the NGOs.

Quoting from a study by Christian Health Association, Dr Afranie said the pandemic had both positive and negative impacts with regard to health.

Positively, he said, there was a decline in malaria cases, respiratory tract infections and an increase in antenatal attendance.

On the other hand, the negative impact included the fact that most resources were shifted to take care of COVID-19 as against malaria and other normal illnesses, antiretroviral for people living with HIV/AIDS, as well as facilities that were meant for community health had to be designated for COVID-19 use.

These things, he said, widened the existing inequality in the system and made people more excluded than they used to be.

On education, for instance, he said most communities could not access the internet to benefit from the GES online education programme, while girls became more vulnerable with the closure of schools.

The Deputy Minister of Education, Gifty Twum Ampofo, announced plans by the government to absorb BECE registration just as it had done with free SHS.

She said the move was as a result of the difficulty some parents had with regard to registering their children for the examination for which reason such children ended their education at JHS 3.

The Chair of the Governing Council of Star Ghana Foundation, Dr Esther Ofei-Aboagye, said with the support of its partners, the foundation was dedicated to promoting active citizenship, and looking for solutions and formulating a response to the things that affected the people.

The Executive Director of the International Federation of Women Lawyers (FIDA), Susan Ayertey, said during the pandemic there was very little information on where women and girls, who were being abused, could access services.

“There were a lot of sexual abuses going on during the pandemic, with girls getting pregnant. How do we get these girls back to school?” she asked.

She suggested that going forward, the health sector could create a corner just like the Adolescents Health Corners in hospitals so that women who were abused could go there for relevant services.