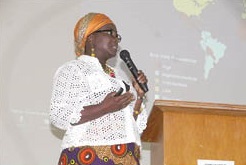 The Association for the Study of Liver and Digestive Diseases yesterday[July 28, 2022] organised a stakeholders’ meeting to commemorate this year’s World Hepatitis Day, with a call on the government to set targets to eliminate the disease from the country.

The day was commemorated in Accra on the theme: “Bringing hepatitis care closer to the communities — Hep can’t wait” and participated by stakeholders in the health sector.

The day is commemorated globally on July 28, every year.

A Senior Lecturer at the Department of Medicine and Therapeutics at the University of Ghana Medical School, Dr Adwoa Agyei-Nkansah, who made the call, said there was the need for the government to work towards preventing and eliminating the virus from the country, as its prevalence rate of eight per cent was higher than that of HIV, which is two per cent.

She added that apart from the low awareness of the disease in the country, there was also no data on Hepatitis D and E, describing the situation as worrying.

Dr Agyei-Nkansah said although many people were infected with the disease, leading to some of them dying, some victims did not still know their status and, therefore, called for increased awareness creation for people to check their statuses at health facilities.

“What we are seeing now is just a tip of the iceberg because these are hospital data. Most people deliver at home, others at prayer camps, while some are self-medicating. The time is ripe for us to go and look for them and put in interventions to protect their lives,” she said.

Dr Agyei-Nkansah cited a research report which named the five regions of the north as having the highest prevalence of Hepatitis B and C.

The Presidential Advisor on Health, Dr Anthony Nsiah-Asare, urged the Ministry of Health and its agencies to put in place adequate measures to reduce the burden of Hepatitis in the country.

On the prevention of mother-to-child transmission of the viral hepatitis B, he said more efforts should be made to implement birth doses of hepatitis B vaccination, which is administered within 24-hours of birth.

For his part, a Deputy Minister of Health, Mahama Asei Seini, said this year’s theme was in line with the government’s agenda to ensure universal health coverage.