China supports fishing port complex with $50m- University of Health and Allied Sciences, others get $16m 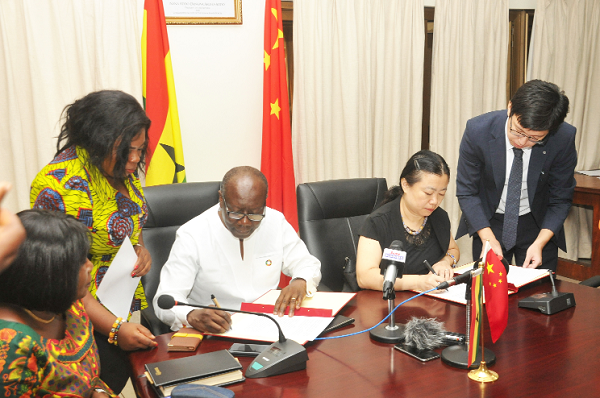 The Chinese government has offered Ghana a grant of $66 million for the construction of the Jamestown Fishing Port Complex and other projects.

The package comprises $50 million for the fishing port complex and $16 million for other projects, including the second phase of the University of Health and Allied Sciences (UHAS).

A signing ceremony and exchange of notes on the Jamestown Fishing Port Complex was held in Accra yesterday.

The Chinese Ambassador, Ms Sun Baohong, signed for her country, with the Minister of Finance and Economic Planning, Mr Ken Ofori-Atta, and the Minister of Fisheries and Aquaculture Development, Mrs Elizabeth Afoley Quaye, initialling on behalf of Ghana.

Both countries also signed a bilateral agreement on the Economic and Technical Cooperation between Ghana and China, under which the $16 million grant for the development of UHAS and other projects fall.

The ceremony was also used to bid farewell to Ms Baohong whose duty tour in Ghana ends on April 16, 2018.

Mr Ofori-Atta explained that the Jamestown Fishing Port Complex project was expected to enhance productivity in fishing and also create about 100 job opportunities for the youth in the community.

The project comes in three parts: dredging the harbour basin and shipping channels, construction of hydraulic structures, and the construction of administration, production and supporting facilities such as office building, kindergarten, trading market and processing area.

The finance minister said the signing marked an important milestone in the bilateral relations between Ghana and China as it affirmed the commitment and determination of the two countries to broaden and deepen cooperation between them.

He noted that the government was working assiduously to ensure the macroeconomic stability necessary for creating the enabling environment for accelerated economic growth to position the country beyond aid.

Mr Ofori-Atta thanked the Chinese government for its continued support, saying “there is the need for a critical mass of resources to push the economy beyond aid.”

For her part, Ms Baohong said the bilateral agreement was expected to lead to more fruitful cooperation between the two countries.

The economic and trade cooperation between the two countries reached $6.67 billion, ranking sixth among 54 African countries.

While Ghana’s export to China was more than $1.5 billion, an increase of over 41 per cent in the previous year, China’s exports to Ghana reached about $5.17 billion, with its investments in Ghana totalling $123 million within the period.

She stated that China’s support to upgrade polytechnic universities was aimed at preparing the country towards industrialisation.

The Chinese government would also establish a cocoa processing company in Sefwi Wiawso in the Western Region to support the country’s industrialisation drive, she added.

“China’s aid to Ghana does not have any political strings; it is for development and we fully support the Ghana Beyond Aid agenda. We hope it will be realised with the help of foreign partners,” she stated.

Ms Baohong commended the government for the various policies and programmes it had implemented since it took over in 2017.