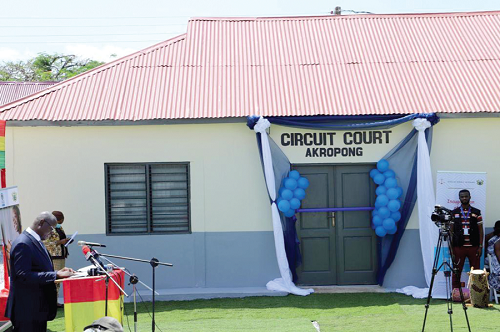 Justice Anin Yeboah (Chief Justice) speaking at the inauguration of the court building.

The Judicial Service of Ghana in partnership with UNICEF and the Government of Denmark have inaugurated a child- friendly gender-based violence court in Akropong in the Atwima Nwabiagya North District in the Ashanti Region to address the needs of children using more age appropriate procedures and tools to mitigate child abuse.

The court is also committed to promoting a system that is sensitive to the plight of women and children, especially those who have suffered abuse.

The facility is made up of a waiting room designed to provide a friendly environment to child victims, witness and children, who for other reasons, come into contact with the law.

It is also furnished with the necessary technical equipment, Closed Circuit Television (CCTV), a small library, toys, information, as well as literature on child protection for psychologists, lawyers, support persons and parents.

The Chief Justice, Justice Anin Yeboah, emphasised that the court would enable the prosecution of crimes involving children in a manner that did not traumatise them further and also ensured that justice was done.

He reiterated that the court was fitted with facilities and equipment that would make interaction of judicial processes a little more bearable for children.

Justice Yeboah said that it would also enable victims to testify from a different room via a two-way video system, keeping them away from their alleged abusers.

“As a partner, UNICEF identifies fully with our vision in this aspect of justice administration and it is demonstrating it in various practical ways," he added.

The Chief Justice stated that the service would continue to make every effort to ensure that the system protected and preserved their safety and security.

He thanked UNICEF whose support and partnership had been critical in the successful execution of the facility.

The Ashanti Regional Minister, Mr Simon Osei Mensah, disclosed that the court would help improve the administration of child justice in the district and the whole region at large.

He urged all to ensure good and sustainable use of the facility to achieve it’s intended purpose.

The Country Representative of UNICEF, Madam Anne-Claire Dufay, reiterated that the court would help strengthen the paths to justice for thousands of children, particularly girls, while helping to demonstrate a solid commitment of the judiciary in making justice accessible to the most vulnerable groups in the society.

She said the court would also transform the experience for thousands of children and would enable them to have easy access to justice with a safer and more comfortable opportunity to testify and provide evidence.

Madam Dufay stated that the facility would allow children to testify without seeing or facing the perpetrator, judges, trained court staff and other professionals.