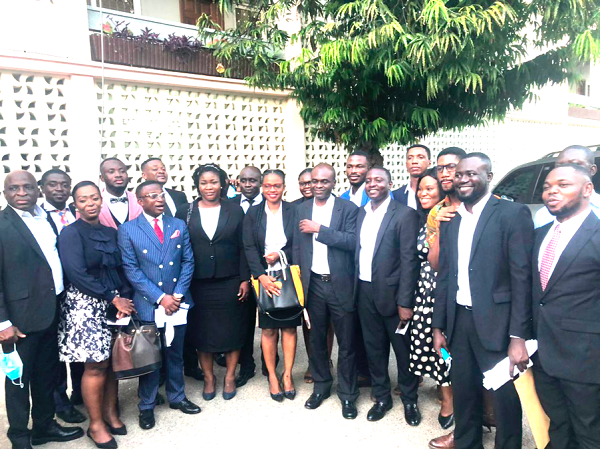 Mr Martin Kpebu (arrowed) with a section of the 499 students
30.5k Shares

The 499 students who are battling to gain admission into the Ghana School of Law (GSL) have expressed gratitude to President Nana Addo Dankwa Akufo -Addo, and the Attorney -General (A-G), Mr Godfred Yeboah Dame, for listening to their plights and facilitating their admission process into the GSL.

The students expressed their appreciation yesterday after the General Legal Council (GCL) informed them they would be admitted into the GSL.

They have also extended appreciation to Parliament, the media, lawyers, non-government organisations and the members of the public who stood by them and fought for their cause.

Lawyer for the students, Mr Martin Kpebu , expressed gratitude on their behalf in an interview with the media after he and leaders of the students met the GLC yesterday.

The meeting was held behind close doors at the A-G’s Department in Accra.

After the meeting, Mr Kpebu told the media that the GLC had formally informed the students that it had decided to admit all the 499 students into the GSL.

“What is heartwarming is that the GLC has decided to admit the 499 students , but the commencement date is what is currently being worked upon,” he said.

Mr Kpebu said the development was a positive step and expressed appreciation on behalf of his clients.

“We express our profoundest gratitude to all the stakeholders who fought for us.

The President, the A-G, Parliament, CSOs and the GLC,

“We are very grateful that for the first time having admitted a certain number of students has subsequently agreed to admit a second group from one set of exams,” he said.

On November 1, the A-G, wrote a letter advising the GLC to admit all the 499 students.

The President directed the A-G to take action on the petitions.

In a letter addressed to the Chairman of the GLC, Mr Dame said the admission process into the GSL was done in a manner which “created doubts about transparency.”

First, he said, the students could be offered deferred admission in May 2022.

“A special provision can be made for the first-year professional course by candidates already admitted to run from October 2021 to April 2022.

“Arrangements will have to be out in place for the two sets of candidates to undertake their pupilage and be called to the Bar on a common date in the next two years,” he said.

The second piece of advice from the A-G was for the GLC to admit all the 499 students now, with effect from November 2021, with “provision made for the organisation of classes in a way as to be able to cater for the needs of the entire candidates to take part in the course of the Professional Law Programme”.

The third option from the A-G is for the GLC to organise special admission examination for the students.

“This is to accord the 499 candidates an opportunity to justify admission to the Law School for the 2021/2022 academic year.

Such an examination may be on essay questions which properly assess the ability of the candidates to reason legally and resolve practical problems,” he added.