Chief, 4 others shot over alleged chieftaincy dispute in Tamale 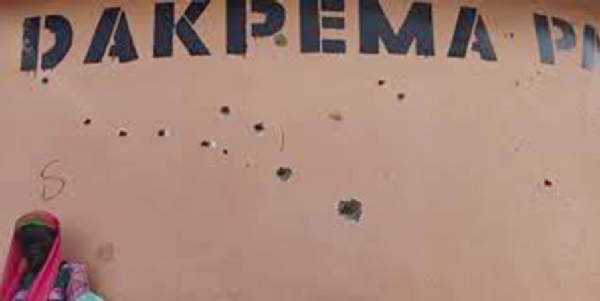 A chief in Tamale, Dakpema Naa Bawa Fuseini, and four other persons have sustained gunshot wounds after some unknown gunmen attacked the palace in the early hours of yesterday.

The chief is said to have been shot in the head and stomach and was rushed to the Tamale Teaching Hospital together with the other victims.

The gunmen, numbering about 15, are said to have stormed the palace at about 5 a.m. and shot sporadically, injuring the victims and destroying other property.

Though the cause of the attack is not yet known, reports suggest that the incident was linked to the recent impasse between the Dakpema and other chiefs in the metropolis over who is the paramount chief of Tamale.

Briefing the media yesterday, the Northern Regional Police Crime Officer, Superintendent Bernard Baba Ananga, said the police received information about the incident and swiftly deployed personnel to the palace, but the gunmen had fled the scene.

He explained that a group of young men in a Toyota Pickup invaded the palace and fired indiscriminately, injuring the chief and the other persons who were around the scene.

“We have visited the chief and the other injured persons at the hospital and they are in stable condition, responding to medical care,” Supt Ananga said.

He indicated that the police had launched an investigation into the incident to apprehend the perpetrators, adding that a joint police and military personnel had also been deployed to ensure calm.

When the Daily Graphic visited the palace, it was observed that motorbikes and other items were also destroyed in the attack.

Deep marks of bullets were visible on the walls of the palace and other buildings around.

Narrating the incident to the media, an attendant at the Dakpema palace, Adam Musah, said the attack took place after the talking drum was beaten in the palace in the early hours of yesterday.

He said the gunmen after firing the gunshots attempted to carry the talking drums away, but the youth of the area fiercely resisted the move.

There has been simmering tension in the Tamale metropolis over who is the paramount chief of Tamale.

While the Dakpema considers himself the Chief of Tamale, the Gukpe Naa holds the same position.

The matter was referred to the Overlord of Dagbon, Yaa-Naa Abukari II, and the Dagbon Traditional Council, who pronounced the Gukpe Naa Alhassan Abdulai as the rightful chief of Tamale.

The Dakpema was subsequently banned from performing certain rituals such as playing of talking drums, which signified that he was a paramount chief.

Reacting to the incident, the Northern Regional Minister, Shani Alhassan Shaibu, said “there was a ban on the Dakpema not to play the talking drum.”

Culturally, every Monday and Friday, the talking drums are played at selected palaces to signify the beginning of the week and the end of the previous one.

Alhaji Shaibu said the Regional Security Council had been engaging both parties to ensure that the incident was resolved peacefully.