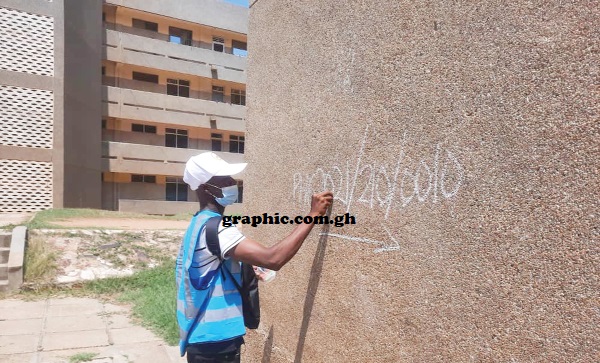 The Ghana Statistical Service (GSS) has announced that it will bring closure to data collection in the ongoing population and housing census (PHC) on August 8, 2021.

This follows a 99 per cent coverage of households in the enumeration exercise across the country, except for the Greater Accra Region where eight metropolitan, municipal and district assemblies (MMDAs) are yet to be covered.

The government statistician, who provided update on the completion status of the enumeration exercise in Accra on August 1, said the GSS was in pole position to clear all hurdles and conclude the data collection exercise in the next one week.

"GSS will withdraw from the field on August 8, 2021, and bring the data collection for the 2021 PHC to conclusion.

"Between now and August 8, we want all persons who have not yet been counted to come out and say they have not been counted," he stressed.

However, upon achieving 94 per cent coverage at the end of the mop-up exercise, the GSS extended the enumeration exercise for a further 12 days ( July 19 - 30).

That extension was to allow the service to exhaust the remaining six per cent of households that were yet to be covered in the exercise in some parts of the country.

The move was also to ensure that all persons in the country were reached and counted.

Providing updates on the July 30 deadline, Prof. Annim said the eight MMDAs in the Greater Accra Region could not be fully covered because of some setbacks, including the refusal of some people to participate in the exercise.

He cited the rapid growth of the population in the urban MMDAs as one of the reasons for the non-completion of the enumeration exercise.

He added that household validation and correction of errors was ongoing as part of the quality assurance processes to ensure that quality data was generated.

"Members of the public should expect census officials to visit households or call to verify data collected by enumerators. The census officials will be wearing jackets branded with the 2021 PHC and GSS logos and carrying photo ID," he said.

Prof. Annim appealed to members of the public to use the official channel for reporting on the toll free number 0800-426-426 "or any of the other numbers”.