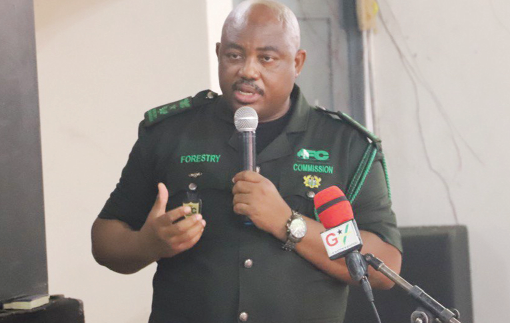 The Wildlife Division of the Forestry Commission has imposed a four-month ban on hunting, capturing and destroying of wild animals in the country’s forests.

Known as the "close season," the annual ban on hunting for all wild animals, except the grasscutter which can be hunted under licence, will last from August 1 to December 1, this year, in conformity with the Wildlife Conservation Regulation, 1971 (L.I. 685).

The essence is to offer respite for wild animals, such as dikers, royal antelopes and boars (bush pigs), which supply the bulk of game (bush meat) as it is time for the animals to breed.

According to the commission, Ghana's wildlife were being overhunted and had reached a point where the dwindling number of animals was threatening the food security of both rural and urban communities, survival of the species and the integrity of the country as a signatory to international conventions.

At a ceremony to announce the ban at the Centre for National Culture in Kumasi last Thursday, the Manager, Kumasi Zoological Gardens, Dr Meyir K. Ziekah, explained that "it is imperative that the animals are given respite from hunting to wean their young for a successful recruitment into the next generation.”

In attendance were members of the Game Traders Association, staff of the Forestry Commission and some security personnel.

Dr Ziekah appealed to the public not to patronise game, dead or alive, except for grasscutter so that hunters would find it uneconomical to hunt the animals.

For the grasscutter, he said research had shown that the “close season’’ could result in excessive populations for them, with possible negative impact on agricultural production, hence the need for the licence to allow for controlled hunting during the season.

Dr Ziekah also called on the police to arrest and prosecute such offenders with assistance from the nearest Wildlife Division or the Forestry Commission offices across the country.

For his part, Mr George Wireko-Brobbey, a former commissioner of the Forestry Commission, reiterated that wildlife had been the source of heritage and livelihoods and that it continued to play a very important role in the development of nations, particularly, those in Africa.

“It features prominently in festivals, the arts, drama and folklore and serves as a totem,” he explained, adding that it also provided animal protein in the diet of many people, ranging from insects to reptiles and mammals.

"Access to bush meat also provides an important safety net for most people in the rural areas in times of economic stress," Mr Wireko-Brobbey added.

The President of the Game Traders Association, Madam Comfort Badu, called on its members to bear with authorities, stressing that although their sales would dwindle in the coming months, they sought to benefit fully in the near future.