Some farmlands under siege in the West Mamprusi municipality
30.5k Shares

Once again, residents of the five regions of the north are at their wits’ end.

This is because the annual ritual of flooding in the north, the combined result of the spillage of excess water from the Bagre and the Kompienga dams in neighbouring Burkina Faso and heavy rains in that part of the country, has reared its ugly head.

Checks by the Daily Graphic revealed that about 28 districts in the Upper East, Upper West, North East, Savannah and Northern regions have been affected by the floods.

However, the worst affected areas are the Wa East and the Wa West districts and the Lawra and the Nandom municipalities, all in the Upper West Region; the West Mamprusi municipality and the Mamprugu/Moaduri District, both in the North East Region, as well as the Bawku West District in the Upper East Region.

Given the unfulfilled promises by successive governments to find a lasting solution to the perennial problem, it appears there is no end in sight for the yearly flooding which occurs between late August and early October.


As had been the case in the past, this year the best the authorities could do was appeal to residents to move to higher ground when the managers of the two dams announced plans to spill the excess water.

As usual, residents living along the downstream of the White and the Black Volta rivers, are the worst affected.

In its September, October, November (SON forecast), the Ghana Meteorological Agency warned of flood risk, saying “there is a high chance of occurrence this year in the northern half of Ghana due to the impact of the rains and the likelihood of the spillage of the Bagre dam in Burkina Faso.”

The managers of the two dams signalled the decision to open the spill gates on August 31, this year, when an official statement they issued indicated that the water level of the Kompienga Dam was 234.71 metres, with a rising rate of 98.40 per cent.

Consequently, this year's spillage has been described as unprecedented, and having been compounded by the month-long torrential rains in the north, residents are struggling to come to terms with their losses.

In the Upper West Region, a mother and her baby drowned in the Dikpe River in the Lawra municipality when they were returning from a market in a nearby Burkina Faso town last Sunday, and at Kinkang in the North East Region, a mud building collapsed on two persons, resulting in the death of one and injury to the other on the same day.

Large acres of rice, millet and sorghum farms have been completely wiped out.

Some communities are reporting that crocodiles have invaded their homes and devoured livestock, thereby creating panic in communities affected by the floods.

A farmer at Babile in the Lawra municipality, Seidu Adam, said he had lost his 20-acre maize and soya beans farm which served as the only source of livelihood for his family.

"I am just devastated because the farm which has been destroyed is the only source of livelihood for the family. Now I don't know what to do because all my investment has gone waste," he said.

Another farmer in the West Mamprusi municipality, John Sibiri, whose story was not different, appealed to NADMO and benevolent organisations to go to their aid to help alleviate their plight.

The Upper West Regional Director of NADMO, Mustapha Ahmed, told the Daily Graphic that the floods had affected transport services between the country and its northern neighbours along the western corridor.

He noted that for now the people, particularly farmers, had been left to their fate, and that there were fears that the disaster could cause more devastation, since water levels were still rising in the region.

Mr Ahmed advised the inhabitants, especially farmers along the Black Volta River, who had not yet relocated to move upland, since the rains had not yet stopped and there were fears that the spillage of the dams could bring more floods.

Explaining the situation to the Daily Graphic, the North East Regional Director of NADMO, John Kwaku Alhassan, said presently some communities in the Mamprugu/Moaduri District and the West Mamprusi municipality could not be accessed, as they had been cut off by flood waters. 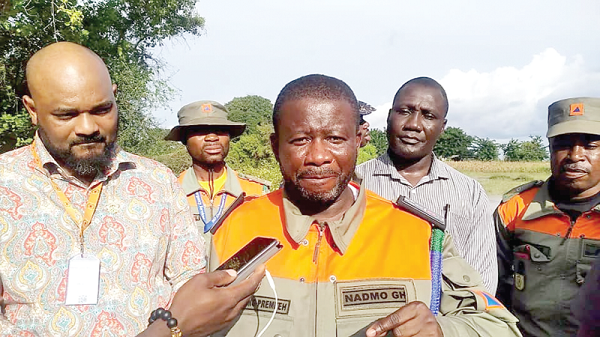 He said NADMO officials would have to wait for the flood waters to recede before they could access those places with canoes to conduct an assessment on the damage caused.

“If you want to go to the Mamprugu/Moaduri District, you cannot use the Kpesenkpa road from Walewale, the West Mamprusi capital, through Wulugu, a journey of about three hours, because a section of the road has been flooded.

“Now you have to go through Bolgatanga-Navrongo-Fumbisi in the Upper East Region, which is about eight hours, before reaching Yagba-Kubori, the capital of the Mamprugu/Moaduri District,” he noted.

Aside from that, Mr Alhassan indicated that some farmlands below the Nakpanduri Scarp in the East Mamprusi municipality had also been submerged and could not be accessed because of the high water levels.

In the Northern Region, the Saboba and the Chereponi districts were cut off from the regional capital, Tamale, and adjoining districts following days of rain in the area last month.

The routes leading to Saboba and Chereponi from Tamale, Yendi and Wapuli were all inaccessible and one had to use a canoe to access the area.

The bridges at Kpalba and Wapuli, which connect Yendi to Saboba, Chereponi, Tamale and other parts of the country, were washed away by water.

In the days leading to the spillage of the dams, the Director-General of NADMO, Eric Nana Agyemang-Prempeh, had gone on a working visit to the northern parts of the country to assess the readiness of NADMO to undertake rescue and relief responses and meet with the chiefs and regional and district officials on the issue.

He told the Daily Graphic that chiefs in various communities were helping NADMO in the effort to get the people to move to higher ground, and warned that it was clear that the flooding was going to be worse this year.

Within the White and the Black Volta enclave, residents appeared to be helpless, but NADMO continued to intensify measures to save lives and properties.

A major threat coming out of the flooding is a looming food crisis because most farmers could not harvest their produce before the floods swallowed everything.

According to the Peasant Farmers Association of Ghana (PFAG), about 3,000 hectares of farmland had been damaged, with an estimated 2,000 farmers being negatively impacted.

The Head of Programmes and Advocacy at the PFAG, Dr Charles Nyaaba, said: “The number of hectares could double by the end of September, with more risk to farmers. If nothing is done immediately, 2023 will come and we’ll still be in the same situation, watching our farms being ruined by the spillage.”

As part of efforts to address the perennial problem, the President, Nana Addo Dankwa Akufo-Addo, in 2019 cut the sod for the construction of the Pwalugu Multipurpose Dam in the Talensi District in the Upper East Region.

The $993-million project, which is being financed solely by the government, had been on the drawing board since the early 1960s, and the sod-cutting ceremony was thus considered historic. 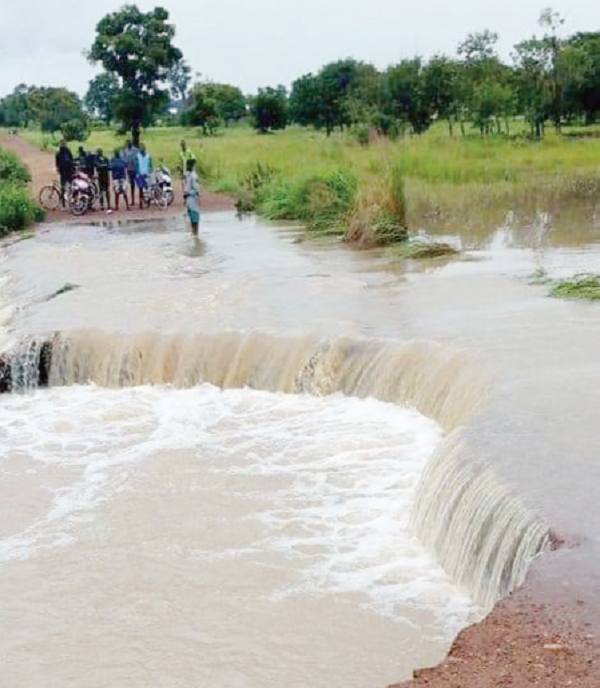 When completed, the multipurpose dam will address three main issues, namely: irrigation, hydropower generation and flood control. It was expected to be completed in about four years, two months.

However, four years after cutting the sod, construction of the project is yet to commence.

To address the challenge, Dr Nyaaba has suggested that the government prioritise agriculture in its engagement with the International Monetary Fund (IMF) to devote substantial gains from the bailout to construct the Pwalugu Dam.

He said he believed the construction of the dam would not only address the flooding situation and the concerns of farmers in the area but also contribute significantly to the national food security agenda.