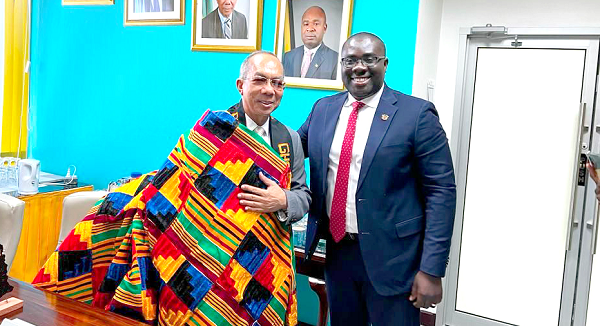 The Director General of the National Lotteries Authority (NLA), Samuel Awuku, has stated that the authority will continue to diversify its revenue potential through the sale of its products on international platforms.

He explained that as a first step, the authority had renewed its membership of the African Lotteries Association (ALA) and the World Lottery Association (WLA) to set the tone for Ghana to trade its games in other countries and rake in the needed benefits.

Mr Awuku noted that he was burnt on building strong bilateral relationships with other countries so that Ghana could trade with them on the basis of its products and services.

He announced that the NLA would be 60 years on September 29, this year, and added that, “We have chalked up a lot of successes and have also had our own challenges but we want to move lottery in Ghana forward and make it a world-class lottery industry”.

He noted that the NLA was seeking to grant the first license for a Caribbean company to operate lottery in Ghana and in West Africa so the visit to Jamaica would afford them the opportunity to assess the possibility to attain that feat.

Mr Awuku and his team later paid a working visit to the Betting, Gaming and Lotteries Commission of Jamaica (BGLC), the regulator of the lottery and gaming in Jamaica.

Dr Chang called for the strengthening of culture and business relations between these two countries for the benefit of the people of both nations.

He expressed worry over the lack of direct flight between West Africa and the Caribbean which he said had been a major impediment in the building of businesses and promised that the leadership of these countries would start a conversation to get it resolved.

He said the lottery had been a major source of support for the Jamaican economy and explained that the proceeds from lottery were invested in culture, health, education and sports development.

The NLA delegation also used the opportunity to visit the former Prime Minister of Jamaica, Percival Noel James Patterson, who served as the sixth prime minister of Jamaica from 1992 to 2006.

Mr Patterson commended the delegation for the honour done him adding, “ I have read a lot about you Sammi and I can see some similarities with our beginnings, I was a youth Leader and later National Organiser of my party, the Peoples National Party.