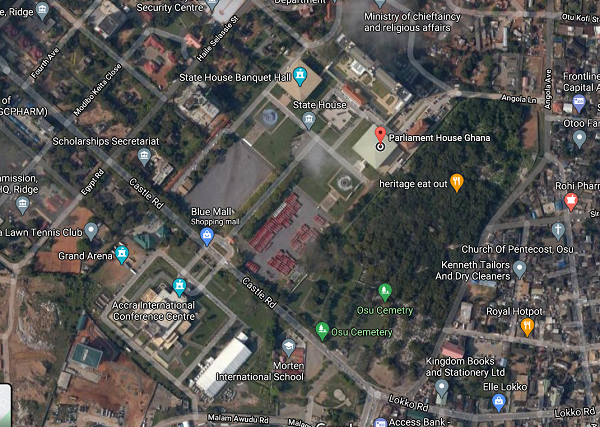 The Motor Transport and Traffic Directorate (MTTD) of the Ghana Police Service has announced that six roads will be closed on January 7, 2021, as part of security measures for the inauguration of President-elect Nana Addo Dankwa Akufo-Addo's second-term.

At a press briefing on Tuesday, January 5, 2021, the Director of Operations of the MTTD, Superintendent, Daniel Sasu Mensah said the Police was also going to cordon-off the ceremonial enclave of the State House which includes the forecourt of Parliament on January 7.

"We (GPS and MTTD) are going to cordon-off the enclaves of where the event is going to be held that is at the forecourt of Parliament of the 7th of January 2021," he said.

"And with the issue of the inner-perimeter cordon, it is going to run through the Ako-Adjei Interchange, the National Theatre Traffic Light, the Osu Cemetery Traffic Light and the GIJ and the Press centre.

"Specifically to manage traffic along the enclaves, this is what we intend to do, we intend to close or block some routes within the arena and the routes that we are going to block or close are first".

He said the roads to be closed are the Osu Cemetery Traffic Light on the Lokko Street, the Castle Road from AU Circle to Osu Cemetery Traffic Light, the Crossroad heading towards Starlet 95 Street, the Independence Arch near the Ohene Djan Sports Stadium, the Gamel Abdul Nasser Avenue (Ghana Institute of Journalism) Road on the Haile Selassie Street and the Opeibea, 37 Military Interchange and Ako Adjei on the Liberation Road.

- Opeibea, 37 Military Interchange and Ako Adjei on the Liberation Road.

He also advised motorists to use the following routes to avoid the road closures;

- Traffic emerging from Madina on the Liberation Road would be diverted to Casely Hayford thence to Obasanjo Highway and the Kanda Highway to link with the Central Business District (CBD).

The swearing-in ceremony is expected to commence at 11 am and will be performed before and within the precincts of Parliament.

Guests apart from Heads of State are expected to be seated by 9.45 am.