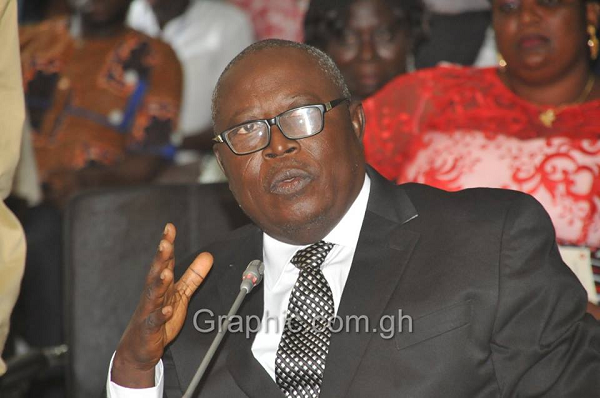 Mr Amidu who stated this in a statement, however, cautioned the public not to politicize the issues.

He explained he has since commenced investigations following the referral of the case to his office by the presidency.

In a statement, Mr Amidu, said there is enough “reasonable suspicion” of corruption and bribery in the deferred prosecution agreement between the European aircraft manufacturing company, Airbus and the British Serious Fraud Office (SFO) in which Ghana was featured, hence a decision to commence an investigation.

On January 31, 2020, Ghana was named as one of five countries that Airbus paid or attempted to pay millions of dollars in bribes in exchange for contracts, which  led British court to fine Airbus £3 billion.

In addition to Ghana, the company allegedly paid bribes to officials in Malaysia, Sri Lanka, Indonesia and Taiwan within the same period.

The UK’s Serious Fraud Office, however, in its statement of fact did not name the Ghanaian officials because investigations were still ongoing.

This has led President Akufo-Addo tasking the Office of the Special Prosecutor to investigate the scandal.

While the opposition National Democratic Congress (NDC) has said the investigations into the issue is unnecessary because no bribe was taken, the governing New Patriotic Party (NPP) has already named former President John Dramani Mahama as government official 1, an elected public figure who dominated the report.

But responding to the request from the Presidency, the Special Prosecutor, Mr Amidu said offences including bribery of public officers and the use of public offices for private profits which falls within his jurisdiction under the OPS Act, 2017 (Act 959) has been determined.

He, however, appealed to the public "not to speculate or politicize the disclosures made in the deferred prosecution agreements and judgments so as to allow this Office to treat the suspected crimes as suspected crimes simpliciter and nothing more, pending the conclusion of the investigation."

Below is a copy of the press statement

The Office of the Special Prosecutor on Monday, 3rd February 2020 at 14:32 hours received from the Secretary to the President letter No. OPS 307/20/87 dated Sunday 2nd February 2020 referring allegations of bribery of Ghanaian Officials in the military aircraft deal disclosed in two deferred prosecution agreements and judgments on 31s January 2020 in the United Kingdom and the United States of America respectively, implicating Airbus SE, certain individuals and Ghana Government public officials for consideration and possible action.

The Special Prosecutor has determined that the said referral and the deferred prosecution agreements and judgments accompanying them raise reasonable suspicion of the commission of corruption and corruption-related offences of bribery of public officers and the use of public office by public officers for private profit, which are offences falling within the mandate of this Office under the Office of the Special Prosecutor Act, 2017 (Act 959). A preliminary investigation was accordingly opened on 4th February 2020 by this Office into the allegations contained in the judgments referred to this Office aforesaid.

The Office of the Special Prosecutor appeals to the public not to speculate or politicize the disclosures made in the deferred prosecution agreements and judgments so as to allow this Office to treat the suspected crimes as suspected crimes simpliciter and nothing more, pending the conclusion of the investigation. 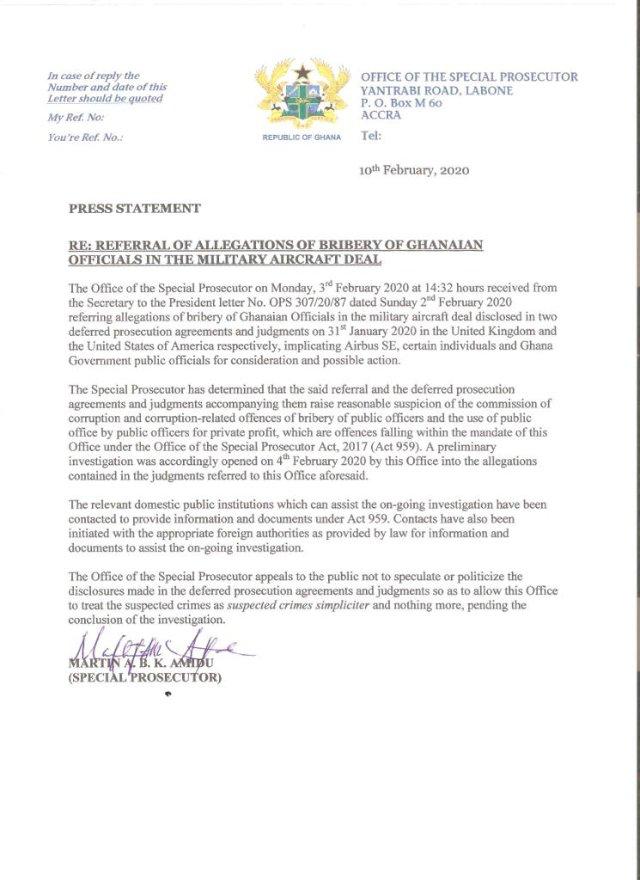