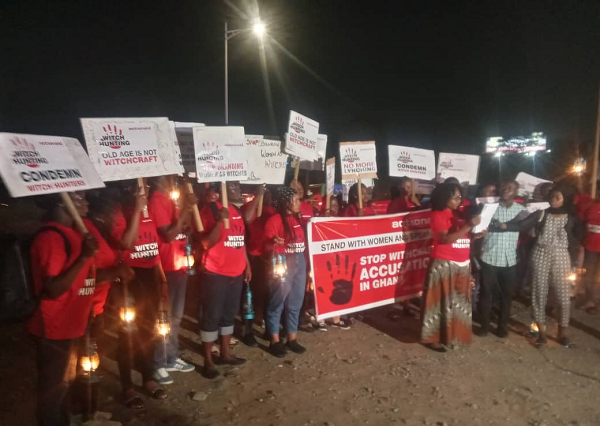 ActionAid Ghana has held a vigil in commemoration of the second anniversary of the lynching of Madam Akua Denteh who was accused of witchcraft at Kafaba in the East Gonja Municipality of the  Savannah Region.

Madam Denteh, 90, was lynched on the accusation of witchcraft. The Kafaba community is about 21 kilometres from Salaga, the capital of the East Gonja Municipality.

The women's Rights and Campaigns Manager of ActionAid Ghana, Madam Margaret Brew-Ward, speaking at the vigil on Saturday evening, July 23, 2022 at Accra Mall, advocated for the criminalisation of witch camps in the country.

She also wants the government to prosecute individuals who operate witch camps, saying witch camps are effectively women’s prisons where inmates have been given no trial, have no right of appeal but have received a life sentence.

"We believe the country need to make this practice unattractive by criminalising and prosecuting individuals who perpetuate such human rights abuses," she noted.

For Madam Brew-Ward, witch camps serve as a platform where women are abused without any justifiable cause.

"Despite the constitution’s protection to all persons in Ghana, there are hundreds of women in the country who are accused of witchcraft and condemned to a life of extreme violence, isolation." she said, adding "These women are banished from their homes and forced to live in ‘witch camps’."

Madam Brew-Ward further said "These witch camps are a cruel manifestation of gender inequality and violence against women in Ghana."

She said witchcraft accusation is not a tradition, pointing out that Article 26 (2) of the 1992 constitution states that “all customary practices, which dehumanise or are injurious to the physical and mental well-being of a person, are prohibited.”

For her, it was worrying that in spite of the fact that the country's constitution frowns on any dehumanising practices, witch camps have been left to operate in some parts of the country, abusing the rights of women.

"The question then is, why are we not getting the needed national attention on this practice," she asked.

People who took part in the vigil, dressed in red T-shirts held lanterns and placards, bearing different inscriptions, such as "No more lynching", "Stop branding old women as witches", "Old age is not witch craft", "Abuse is not tradition", "Condemn witch Hunters", and "Silence means supporting, speak against witch hunting."