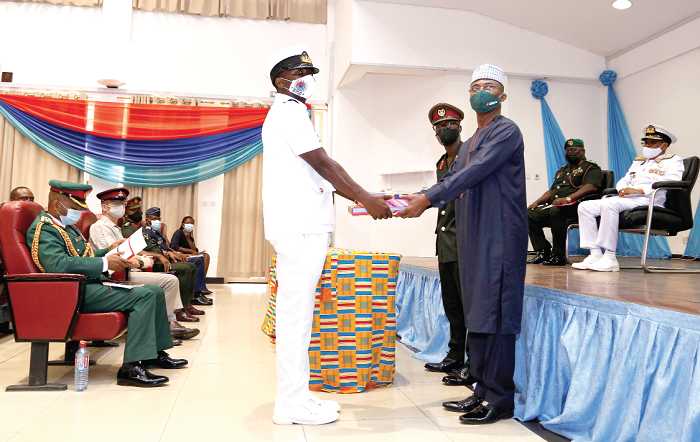 The Ghana Armed Forces Command and Staff College (GAFCSC) has presented Staff Course certificates to 59 personnel who participated in the 75th Junior Staff course in Accra.

The graduands comprised 48 Ghanaians from the Ghana Army, the Ghana Navy and the Ghana Air Force, and a personnel each from The Gambia and Liberia, as well as nine others from Nigeria. Also included were two personnel from the Customs Division of the Ghana Revenue Authority (GRA).

They underwent a 20-week training, which included analytical and communication skills, internal security and counter insurgency, as well as programmes on national and international issues.

They also presented long essays known as Assistant Commandant’s Paper, as part of the course, facilitated by lecturers from the University of Ghana, the Ghana Institute of Management and Public Administration (GIMPA) and other selected state agencies.

Some of the graduates were also honoured for their outstanding performance during the course.

A former Commandant of the college, Air Vice Marshal Issifu Sakib Kadri (retd), was also presented with a plaque for his effort in ensuring the college attain a world-class status during his tenure in office.

The Assistant Commandant of the College, Brigadier General A. K. Dawohoso, commended the officers for successfully completing the course in spite of the challenges presented by the COVID-19 pandemic.

He said the college had to put in place measures to ensure that students went through strict COVID-19 protocols on arrival which included a test for all them.

Brig. Gen. Dawohoso said the junior division of the college was aimed at training officers to staff functions by developing their leadership skills.

In view of that, the Assistant Commandant of the college said only students who were able to prove their ability and met the course standards were being awarded with the “JSC” symbol which signified that they had passed the Junior Staff Course.

Air Vice Marshal Kadri, also commended the leadership of the college for successfully organising the course in spite of the challenges posed by the pandemic.

He said that it had afforded the officers the opportunity to broaden their professional and general perspectives on matters of both national and international dimensions.

He reminded the officers about the current and emerging threats posed by transnational organised, civil unrests and terrorism.

Air Vice Marshal Kadri noted that although they seemed to have been overshadowed by the pandemic, they were persisting and required a multifaceted approach since no single institution could successfully handle it.

“I am happy that the course has participants from sister African countries who I believe have shared their experiences on how their respective countries are dealing with the prevailing threats and the pandemic.

“It is my hope that they learnt a few positive lessons from the Ghanaian approach and will share those lessons back home,” Air Vice Marshall Kadri said.