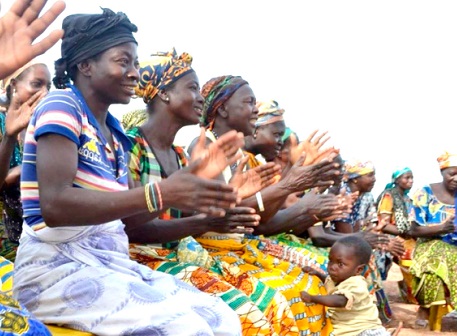 The Krontihemaa of the Oguaa Traditional Area, Nana Amba Eyiaba, has called for concerted efforts to remove practices and traditional stereotyping that fuel sexual and gender-based violence (SGBV).

She said the statistics on SGBV indicated that one in three women suffered one form of SGBV or the other in the country, an indication that the incidence was prevalent and that women were mostly the victims.

Nana Eyiaba was speaking at a forum as part of activities to mark 16 days of activism organised by Star Ghana Foundation in Cape Coast on Tuesday.

The forum, organised with support from the Foreign Commonwealth and Development Office (FCDO), was attended by about 80 participants from various stakeholder organisations in the Central, Western and Northern regions.

It was also to highlight community-led approaches to end and increase awareness and galvanise efforts from key stakeholders on innovative approaches to ending all forms of SGBV against women and girls.

She said relevant stakeholders must be proactive in effective networking to reduce the staggering statistics of SGBV in the country.

Nana Eyiaba noted that statistics from the Greater Accra Regional office of the Domestic Violence and Victim Support Unit (DOVVSU) indicated that 31.9 per cent of Ghanaian women faced at least one form of domestic violence in 2020.

She said other statistics available further indicated that one in three women were fondled against their will in 2016, while two out of 10 Ghanaian women had sex out of their own will. Seven per cent of women had been forced to touch the private parts of men, saying, “this needs attention to reduce the incidence.”

The queenmother called on the Ministry of Gender, Children and Social Protection to operationalise the Domestic Violence Fund.

The fund, she said, would help take care of abused persons who needed care and support and called on the ministry to show leadership in getting the fund operational.

Nana Eyiaba further urged men to support campaigns to remove all forms of SGBV, including emotional and psychological violence, to make the homes and communities safer.

These, she said, were worsened by media constant description of women as “helpless victims” and urged leaders of all sectors to push for safer communities devoid of SGBV for women and girls.

She further proposed that SGBV cases that needed health care should be covered under the National Health Insurance Scheme.

A Governance Advisor with the FCDO, Clara Osei Boateng, said persons in authority must work to support systemic changes and challenge social norms which were increasing the incidence of SGBV.

She said there was the need to economically empower women to embolden them to live toxic relationships and empower survivors to be safe and secure.