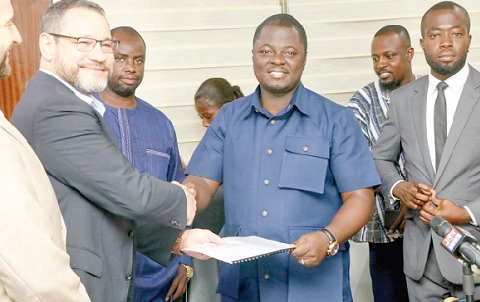 The Youth Employment Agency (YEA) has signed a memorandum of understanding (MoU) with INZAG Germany, a construction firm, to employ 700 young Ghanaian artisans.

The artisans will include masons, plumbers, carpenters, tilers, plaster of Paris designers, fabricators and steel benders.

They will be engaged by the company to construct and rehabilitate the Ashaiman- Akosombo dual carriage road.

The agreement formed part of YEA’s vision to ensure that at least more than 25,000 young people were employed by the end of this year.

The Chief Executive Officer of YEA, Kofi Baah Agyepong, said the two-year partnership agreement was part of the agency’s vision to build a solid database of young men and women with relevant artisanal skills for the job market.

“We will train and upscale their skills. By this, the artisans are not only going to earn a living for themselves through this employment, but will proudly contribute their expertise to the construction of a major state asset," he said.

Mr Agyepong attributed the unemployment situation in the country partly to the lack of requisite skills and said the agreement would, therefore, lead to upgrading of skills of the trainees.

He further said that the agreement was carefully put together with the welfare and safety of the beneficiaries at heart.

Mr Agyepong said under the agreement, beneficiaries would have their income tax, social security contributions and all other statutory payments made on their behalf by the company.

He said already, 2,000 youth under a prison warden assistants scheme had commenced training and would be passing out soon, while 15,000 community police assistants had also started training in batches of 5,000 at the various police training depots in the country.

According to him, all the trainees might eventually be engaged by their respective agencies in future.

Additionally, a total of 1,000 youth secured some form of employment during the various job fairs organised across the country, he added.

The Country Manager of INZAG Germany, Fernando Mariano, commended YEA for the collaboration.

"We look forward to seeing the partnership blossom to its fullest. This is a great opportunity for the youth in Ghana and we do not take it for granted. We are happy to work with YEA," he said.

Also present at the event were the Contract Manager and Project Director of the company, Alvaro Veiga de Oliveira and Jose Teles.