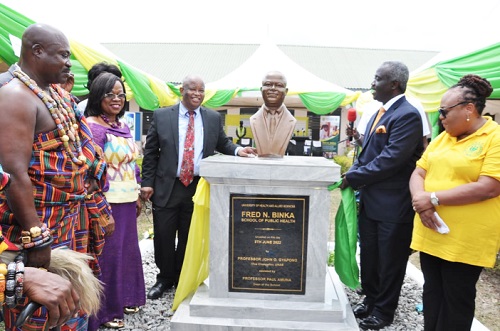 The ceremony took the form of a mini-durbar and the unveiling of a bust of Prof. Binka.

“As foundation Vice-Chancellor of UHAS, Prof. Binka oversaw the establishment of the initial, major infrastructural projects of the university, including the School of Public Health in Hohoe,” said Prof. Gyapong.

He said Prof. Binka still continued to teach, mentor and lead as a research professor in clinical epidemiology well into his retirement years.

That, the Vice-Chancellor said, testified to Prof. Binka’s passion for public health and his desire to see the establishment of an internationally recognised school of public health.

Meanwhile, Prof. Gyapong said work on the four-storey building at the permanent site of the Fred N. Binka School of Public Health at Fodome, near Hohoe, was progressing.

He said the school would have six departments and a 150-capacity auditorium.

Prof. Binka said he was overwhelmed by the honour bestowed on him.

He said he would continue to work to raise funds to develop the structures of the Fred N. Binka School of Public Health, stressing that the school was the result of the persistent pursuit of a noble initiative to serve mankind without giving up.

The Dufia of Fodome-Tormegbe, Togbe Zeh II, said the Fred N. Binka School of Public Health had brought opportunities to the Hohoe Municipality in the sectors of education, health and commerce.

He said naming the school after Prof. Binka was a fitting tribute to his immeasurable sacrifice and contributions to UHAS.