Pupils, students return to school after 10 months at home 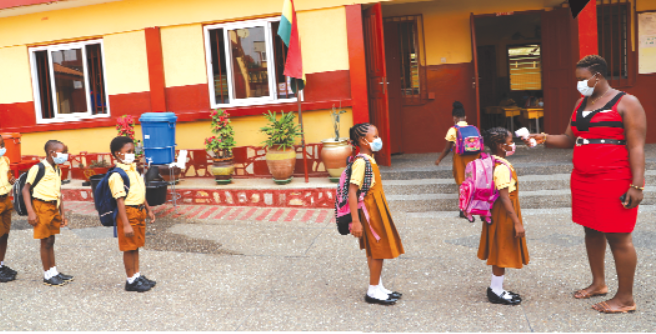 Pupils and students of public and private schools, both basic and senior high schools (SHSs), yesterday returned to school, after 10 months at home due to the outbreak of the coronavirus disease (COVID-19) pandemic in Ghana.

While students of SHSs began reporting to school from last Friday, pupils and students of primary and junior high schools (JHSs) reported to school yesterday to begin the new academic year, per the new curriculum introduced by the Ghana Education Service (GES).

The government announced the closure of all schools in March 2020, and while final-year students were allowed to return to school later in the year to complete their courses, all others remained at home until President Nana Addo Dankwa Akufo-Addo announced the reopening of schools in his 21st address to the nation on the COVID-19 pandemic.

Many pupils and students were visibly happy to have returned to school after almost one year at home and said they were determined to stay safe to ensure that the infection was curbed to avoid another closure.

On its rounds, the Daily Graphic further observed that there was adherence to the COVID-19 safety protocols, such as the wearing of face masks, washing of hands with soap under running water and social distancing.

Being the start of a new academic year, the Daily Graphic observed that many parents had also come to seek admission for their children, particularly those who were of age to begin Class One, as well as kindergarten.

While the protocols were strictly adhered to by pupils and students of most of the private schools visited, many of the children who reported at many of the public schools arrived without face masks.

All pupils and students, as well as their parents, who reported at the schools had to wash their hands with the facilities provided at vantage points, after which they had their temperature checked, before being allowed entry onto the school compounds in their masks.

At some public schools, the Daily Graphic team observed that although Veronica buckets were  placed at vantage points, there was no water in them, nor were there soap and tissue paper for use.

There was also no hand sanitiser.

Students happy to be back

In Accra,  Emmanuel Bonney and Felicia Kwarteng report that most of the pupils and students who had reported for school were very excited to be back and eager to return to the classrooms to study, in spite of the threat posed by the pandemic.

Some of the schools visited in Accra included Accra Academy, the Ngleshie Amanfro Basic Primary School, the Kanda Cluster of schools, as well as some basic schools within Adabraka, Kaneshie and Osu.

A number of pupils without masks told the Daily Graphic that their parents had said they would be provided with masks in school.

Others argued that the hot weather did not allow them to keep the masks on for long, hence their decision to put them in their pockets.

When the Daily Graphic team arrived in the schools, many pupils and students had arrived and they were seen busily tidying up their compound.

In conversations with them, almost all of them said they were happy to be back and to reunite with their friends after almost 10 months at home.

They said they were determined to observe the protocols to ensure that there would not be any reason to warrant the closure of schools again.

At the Ngleshie Amanfro Three Basic School, the Assistant Head Teacher, Ms Sabina Hago, said although they were excited about being back, their major problem was how to deal with social distancing.

She said, for instance, that at the JHS, they had to contend with about 70 students in a class, adding: “I wonder how we are going to go about this. In some of the classrooms, there are dual desks shared by students. We don’t know how we will manage with that.”

He said the Municipal Education Director for Osu Klottey had assured her that by the close of the day, personal protective equipment would arrive in the school.

Some parents had also visited the schools in the company of their children to seek fresh admissions for them.

The heads of most of the schools said new admissions would receive attention on Friday, as the opening day was for continuing students to settle in.

Many SHS students and basic school pupils in the Agona West municipality returned to their various schools with smiles on their faces, reports Gilbert Mawuli Agbey.

In an interview, some of the pupils said they were delighted that school had been reopened, since they had stayed at home for a long time, which might have had negative consequences on their academic performance.

“Staying at home all this while has been very tiring and it is good news to us that we are back in school to continue academic work,” they said.

A parent, Madam Ama Sarfo, said in an interview that in her candid opinion, pupils at the lower primary level should have been exempted, since it would be very difficult for them to adhere to the safety protocols, which would expose them to danger.

“My daughter, who is a kindergarten pupil, won’t be returning to school any time soon, since she will obviously be exposed to the virus,” a worried mother indicated.

The Headmistress of the Swedru Girls’ Model School, Madam Lucy Lartey, noted that measures had been put in place to ensure the safety of everyone and also create a conducive atmosphere for teaching and learning.

For his part, the Headmaster of the Swedru School of Business (SWESBUS), Mr Justice Kojo Frimpong, said classrooms that hitherto accommodated 40 students now contained between 25 and 30, in compliance with the social distancing protocol.

From Kumasi, Kwadwo Baffoe Donkor reports that at the SSNIT Presbyterian Model School at Asuoyeboa, some of the pupils who ran around playfully had their masks off, while others had it on.

One Primary Two pupil who had his mask off told this reporter that even though they were told not to remove the masks, “I find it difficult breathing while playing, so I take it off to enable me to breathe”.

He said aside from the teachers educating them on what to do, “my parents also educated me on the safety protocols before I came to school”.

As early as 6.30 a.m., some pupils in the Sunyani municipality were already by the road side, waiting for their school buses to pick them to school, report Emmanuel Adu-Gyamerah and Biiya Mukusah Ali from Sunyani.

The Daily Graphic observed that the social distancing protocol was absent in schools visited, as the pupils chased one another and played around.

The authorities blamed parents for not providing face masks for their children when they were reporting to school.

In the classrooms, pupils could not practise social distancing because of the limited space and rather sat close to one another on their dual desks.

The Assistant Headmistress of the Nyamaa Basic School in Sunyani, Mrs Angela Amponsah, appealed to parents whose children had underlying health conditions to make such illnesses known to the school authorities, so that those children would be monitored.

That, according to her, would help the school authorities to pay extra attention to the children to prevent any unfortunate eventuality.

Some schools in Ho had prepared adequately for the reopening to ensure that the COVID-19 prevention protocols were adhered to, reports Mary Anane-Amponsah.

When the Daily Graphic visited the Ho Dome RC Basic School, schoolchildren were in their face masks and in class.

The Headteacher, Madam Veronica Gedia, said the school was yet to pick its personal protective equipment, such as masks, sanitiser, soap and tissue paper, from the education directorate.

She said enrolment had increased and advised parents and guardians to educate their children and wards on preventive measures and protocols before sending them to school.

From the Hohoe municipality, Jemima Achivors reports that school heads and teachers arrived in good time to welcome their pupils and students back to school.

As early as 6 a.m., the Gbi-Wegbe E.P. Primary and JHS had started receiving students in their neat green uniforms.

The Headmaster of the school, Mr Patrick Dzandu, indicated that adequate preparations, as far as the COVID-19 protocols were concerned, had been made.

Mr Iddrisu Salifu,a parent, told the Daily Graphic that his children would not go to school until he was satisfied with certain conditions.

When the Daily Graphic visited some of the schools, it gathered that some private schools, such as the Great Victory Academy and the Desert Pastures International School, had been able to put in place effective preventive measures.

A female teacher at the St Charles’s Roman Catholic Primary in Bolgatanga, who pleaded anonymity, said apart from the school not being supplied with the necessary PPE, many children had reported to school without face masks because their parents could not afford to buy some for them.

From Koforidua, Cynthia Addi-Chanagea reports that while schools welcomed their pupils and students back to school, there were concerns over the delay in the supply of PPE, as promised by the government.

In an interview, the Headmistress of the Madonna Basic School, Rev. Sister Cecilia Boateng, while expressing excitement at the return of the pupils and students to school, was worried about the government’s delay in distributing PPE to schools.

Some JHS students of the Ascension Presbyterian JHS, who spoke with the Daily Graphic, expressed delight at their return to the classroom and expressed the hope that the cases of COVID-19 would be well managed to avoid a situation where academic work would be disrupted again.