Preparing for admission of free SHS students:Universities appeal for support 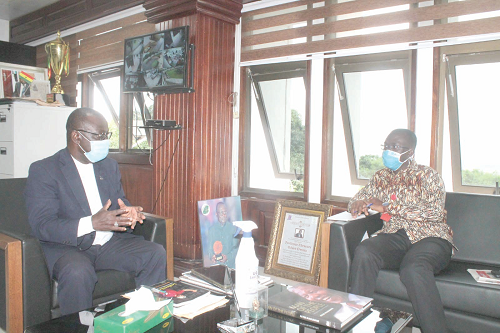 The Chairman of Vice-Chancellors Ghana (V-CG), Professor Ebenezer Oduro Owusu, has entreated the government to support public universities with infrastructure and logistics to enable them to admit more students.

Following the introduction of the free senior high school (SHS) policy, it is expected that a large number of the first batch of beneficiaries of the policy will qualify for tertiary education this year.

Prof. Owusu said although the universities had stepped up preparations for the prospective students, they still needed the intervention of the government to accommodate as many students as possible.

Citing the University of Ghana (UG), Legon, of which he is the V-C, Prof. Owusu said the university was putting up new lecture halls made of prefabricated materials that could accommodate more students.

“As vice-chancellors, we have sent proposals to the government, while putting in our own plans to deal with the challenge,” he said.

Prof. Owusu made the call in an interview with the Daily Graphic on preparations being made by the public universities to admit the free SHS students.

It is expected that about 360,000 students will complete SHS in the country this year, including beneficiaries of the free SHS policy, a situation that will increase admission numbers to tertiary institutions.

However, the Legon V-C said with the needed support from and collaboration of stakeholders, the institutions might surmount the challenge.

The university had also seen the resurfacing of roads and car parks, which is about 80 per cent complete, the construction of walkways and the provision of security posts at sensitive spots, he said.

It was also during his first tenure that the International Association of Universities made the U-G a world-leading institution in the UN Sustainable Development Goal 1 (SDG 1) — reducing poverty, he added.

Prof. Owusu said he also spearheaded the signing and execution of 55 partnership agreements with both local and international institutions.

He said he also introduced an endowment fund, explaining: “I do not believe people should pay huge sums of money for their Ph.D. This can only happen if there is an endowment.”

On the COVID-19, the Professor of Entomology said restrictions imposed on people had led to the introduction of online teaching.

“We have been faced with challenges during this period with online platforms and we will deal with the issues, going forward. One of them is to ensure that assignments given to students are handled by themselves,” he added.

Responding to issues on the global ranking of universities, the Legon V-C said the government could select specific public tertiary institutions for support to enable them to compete favourably in the global space.

He cited Egypt where the government was supporting some specific universities which were performing well on the world rankings.