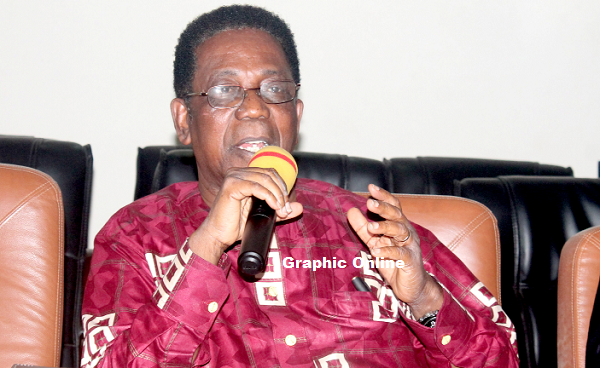 The African Institute for Mathematical Sciences (AIMS) has introduced a nine-month programme to get girls in senior high school (SHS) to develop the interest in mathematical sciences.

For three weeks, the maiden batch of 30 females selected across the country with a strong background in mathematics and physics will be hosted at the AIMS-Ghana during which the girls will be trained on how to identify problems, probe the problem and how to find meaningful solutions to them.

The programme, championed by AIMS-GHANA with UNESCO, the GETFund and the Ministry of Education as partners, hopes to improve the confidence of the girls because of the collaborative learning environment in which they will find themselves.

Launching the programme, the Minister of State in charge of Tertiary Education, Prof. Kwesi Yankah, expressed excitement that the programme sought to address an existing gap in science, technology, engineering and mathematics (STEM) in the country.

He noted that mathematics was a subject perceived by most people as difficult and as such not encouraged for females, “but this is unfortunately not right,” adding that females had the potential of excelling in mathematics from basic through secondary to tertiary level education.

Prof Yankah said the main factor was mentoring and having role models, “our society has not made a conscious effort in breeding mentors and role models for our girls when it comes to STEM particularly mathematics,” he noted.

He said it was the expectation of the government that the GMSP offered opportunity to many young girls from all parts of the country including deprived communities and would change how girls viewed their place in maths and its possibilities beyond the classroom.

Welcoming the guests, the Central President of AIMS-Ghana, Dr Prince Koree Osei, said the GMSP was aimed at harnessing the most talented female critical thinkers, innovators and scientists, who would lead transformation in Africa in the future.

He explained that the nine-month programme would be carried out in two modes, made up of offsite monthly meetings and onsite or residential within the period of holidays in April and August.

Dr Osei attributed the poor performance of students in Mathematics to the inability of the teachers to teach the subject in simple terms to the understanding of the students.

The Chief Executive of AIMS-Ghana, Ms Lydie Hakizimana explained that AIMS was a pan-African network of centres of excellence for post-graduate training in mathematical sciences, research and public engagement in science, technology, engineering and mathematics (STEM).

For his part, the GETFund Administrator, Mr Richard Boadu, said female education was a strategic development priority, stating that an educated woman would lead to low child mortality and maternal deaths.

The Secretary-General of the National Commission for UNESCO, Mrs Ama Serwah Nerquaye-Tetteh, in her contribution, said AIMS-Ghana was a blessing to Ghana in the quality of human resources they had churned out over the years of existence, adding that, their students had produced cutting edge research works that were helping to solve the problems of our day.